"It's just easy to endorse him," Arpaio said, "because everything I believe in, he's doing and he's going to do it when he becomes President."

Trump praised Arpaio as "This is a man who believes in borders....He's tough, he's strong and he's smart."

Trump noted that Arpaio had offered him an endorsement some time ago, but that the campaign held on to it for the right moment.  In answer to the first press question, Trump noted that he made "no deals" with either Arpaio or Palin. 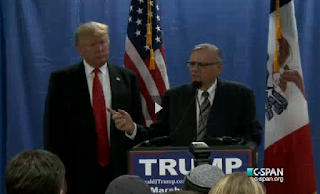 We welcome your comments about this post. Or, if you have something unrelated on your mind, please e-mail to info-at-arizonaspolitics-dot-com or call 602-799-7025. Thanks.
Posted by Mitch M. at 5:23 PM