The committee looking to raise Arizona's minimum wage to $12/hour by 2020 filed more than 271,000 petition signatures today. The 120,000-plus cushion is quite possibly the largest ever and virtually ensures that the measure will be on the November general election ballot.

Tomas Robles, the chair for Arizonans for Fair Wages and Healthy Families group, indicated this morning that they are prepared to spend "multi millions" on the campaign over the next four months, after spending more than $300,000 to collect the petition signatures.

The Arizona Restaurant Association intends to lead an opposition effort to the increase. President and CEO (and Maricopa County Supervisor) Steve Chucri told Capitol Media Services that a challenge to the petitions might be forthcoming, questioning whether registered voters signing the petitions were adequately vetted by circulators.

However, with a turn-in of more than 148% of the state required number of 150,642 signatures, it would be nearly impossible to strike more than 120,000.  After campaign finance reports indicate that the committee had paid more than $300,000 by May 31 to one of the top signature gathering firms (Sign Here Petitions) to collect and verify (signers and circulators), it is even more unlikely.

While there have been constitutional amendment initiative efforts that have turned in more signatures (than the minimum wage effort) in the past - there is a higher valid signature requirement - it is unlikely that any of them turned in more than 120,000 excess signatures. 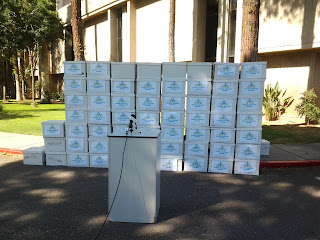 We welcome your comments about this post. Or, if you have something unrelated on your mind, please e-mail to info-at-arizonaspolitics-dot-com or call 602-799-7025. Thanks.
Posted by Mitch M. at 2:56 PM