Hack forwarded the letter to Arizona's Politics this morning. (below) In response to questions, she said "I am in the convention as a guest", but twice declined to say whether any action to restore her to the Arizona delegation is being taken.

The letter, which Hack released as what she calls a "Public Service Announcement", attorney Trevor Stanley from major law firm BakerHostetler, concludes that Graham "acted unilaterally" and in "contravention" of state party delegate selection rules. Stanley also notes that Ms. Hack's counsel (possibly him) had checked with the RNC on Friday and that neither Graham nor anyone else had filed a formal action to remove her as a delegate.

Graham, who is considering mounting a campaign to become the next Chair of the Republican National Committee, was quoted in yesterday's Arizona Republic as saying Hack "is misleading the entire nation by saying she went through some  process to restore her credentials." 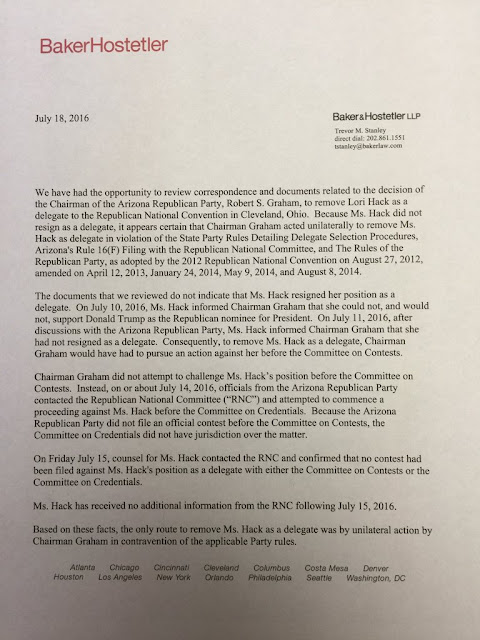 We welcome your comments about this post. Or, if you have something unrelated on your mind, please e-mail to info-at-arizonaspolitics-dot-com or call 602-799-7025. Thanks.
Posted by Mitch M. at 9:23 AM