Arizona's Politics has confirmed that the Federal Elections Commission today intentionally removed a public filing made yesterday by a crazy soliciting "reward" contributions for his plan to assassinate President Donald Trump.

Upon checking the listings of newly-filed campaign committees, etc., Arizona's Politics noticed the unusual and scary committee titled "I Am Going to Assassinate President Donald J Trump". Wanting to make sure that it had not been filed by some crazy person located in Arizona, we did more checking.

The FEC indicated that "No Committee Records found".  Further checking indicated that a couple of other outlets had already published information about the filing. A self-described "conservative news organization", TruePundit, published a no-longer-working link to the filing (which included the FEC number assigned to the committee), along with quotes from the filing.

This evening, FEC Press Officer Judith Ingram confirms to Arizona's Politics that "the filing was removed from the website intentionally. The decision to remove the posting was made internally."

In other words, the FEC did not take the notice down under a request or order from the U.S. Secret Service or any other law enforcement agency.

Arizona's Politics has contacted the Secret Service and will update as warranted. Their Chicago office did acknowledge that they are "aware" of the situation.

UPDATE, 4:55pm: Following this article, @IAmTheWarax, an online national security-related poster located an HTML version that had inadvertently not been pulled down by the FEC. We have redacted the below image so as to not encourage any crazies to donate to the crazy. 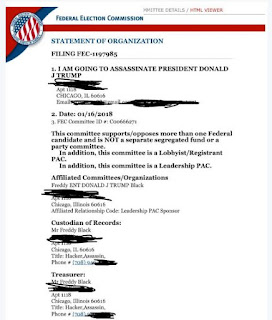 We welcome your comments about this post. Or, if you have something unrelated on your mind, please e-mail to info-at-arizonaspolitics-dot-com or call 602-799-7025. Thanks.
Posted by Mitch M. at 3:55 PM

Has anybody here
Seen my old friend, John...