Arizona's Secretary of State's Office announced this afternoon that the Clean Energy initiative easily qualifies for the November ballot. However, a trial is still set in Maricopa County Superior Court this coming Monday to hear evidence from the Arizona Public Service-funded opposition group. 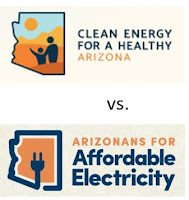 The Secretary of State reviewed the petitions containing 480,000 signatures and the County Recorders from around Arizona then reviewed a random sample of the signatures. Nearly 226,000 valid signatures are necessary to make the ballot.

The Secretary of State's review eliminated approximately 2.2% of the petition sheets, which meant that the County Recorder's would have to find that more than 48.72% of the sampled signatures were valid signatures. They found a validity rate higher than 72%.


The APS-funded opposition filed a legal challenge to the signatures, and have claimed that their reviewers found only 22% of the (overall) signatures to be valid. They have a trial set for this coming Monday to prove why their reviewers got it right.


"This is a big win for voters and another step toward moving Arizona into a clean energy future. APS has launched an unprecedented opposition campaign designed to deny voters a choice for more renewable energy like wind and solar. This includes spending over $7 million of their own customers' money. In November, voters will have the choice between doubling down on dirty expensive energy like coal and gas, or moving our state to a 50% renewable energy standard that will lead to investment in wind and solar."

AAE spokesman Matt Benson said to Arizona's Politics that "we look forward to seeing the initiative campaign in court."

This is the 2nd initiative - of the four filed last month - to be cleared for the ballot by the Secretary of State's Office. The Protect Arizona Taxpayers Act was the first. Invest In Ed and Outlaw Dirty Money are still being checked by several County Recorders. (The Save Our Schools referendum and the Legislature's referral on the Citizens' Clean Elections Commission will also be on the November ballot.)

We welcome your comments about this post. Or, if you have something unrelated on your mind, please e-mail to info-at-arizonaspolitics-dot-com or call 602-799-7025. Thanks.
Posted by Mitch M. at 3:43 PM