fROM OUR OVER-WORKED IRONY DEPARTMENT: A centrist group that is apparently trying to hide its identity disclosed last night that it is spending $10,000 to accuse Democratic Congressional candidate Matt Heinz of hiding his positions. The group is likely supporting former Rep. Ann Kirkpatrick in this month's primary, and its largest single donor is 21st Century Fox CEO James Rupert Murdoch. 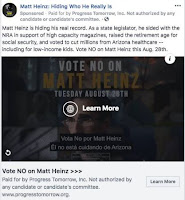 Progress Tomorrow, Inc. filed its independent expenditure report with the Federal Election Commission last night (see, below). The spend is on digital advertising opposing Heinz. Progress Tomorrow has received all of its $1.3M in funding from two other new Super PACs - Forward Not Back and United Together.

And, they have received their funds from a variety of donors - the largest donation coming from 21st Century Fox owner James Rupert Murdoch.* (His was the only $500,000 check.) Sometime-Arizona residents Jerry Reinsdorf and Bud Selig are other large contributors.

Further, this network of Super PACs - while not dark money - seems to trace back to the No Labels group/movement. No Labels works to bring Democrats and Republicans together in Congress, and sponsors the Problem Solvers Caucus. Former Rep. Kirkpatrick was a member of the caucus during most of her time in the House representing CD1. Here is a link to the Chicago Sun Times investigation that made the connections between Progress Tomorrow & Co., and No Labels.

Their efforts to disguise the connection makes their digital ads against Heinz all the more ironic. (Bonus irony: Kirkpatrick has also been accused of being too NRA-friendly.)

Progress Tomorrow - Vs Heinz by arizonaspolitics on Scribd

* CLARIFICATION: James is actually one of Rupert’s sons. And, he has supported both R’s and D’s in the past.

We welcome your comments about this post. Or, if you have something unrelated on your mind, please e-mail to info-at-arizonaspolitics-dot-com or call 602-799-7025. Thanks.
Posted by Mitch M. at 12:44 PM