(Arizona's Politics is an independent, non-partisan political news blog. When we engage in analysis or commentary, we attempt to label it as such. This article may be classified as "news analysis" because it attempts to "provid(e) interpretations that add to a reader's understanding of a subject.")
Arizona's Mark Kelly is being sworn in as the newest U.S. Senator Wednesday afternoon, marking the unofficial beginning of his re-election campaign in just two short years. 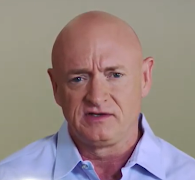 Kelly won the special election last month to fill the remainder of the 6-year term that the late John McCain was elected to in 2016. Last week, he filed his Statement of Candidacy (below) to run for the full term.
Meanwhile, while no statements have been made on the GOP side, a battle is shaping up which could pit Arizona's Governor against the Chairwoman of his state party. And, outgoing President Donald Trump may have just chosen sides between those two great friends of his. An Arizona Republican political consultant thinks Trump's endorsement would most help Kelly win re-election.
Kelly's battle to unseat the appointed Martha McSally was the most costly campaign in Arizona history and one of the most expensive in the nation this year.
He headed into the final weeks of the campaign with $11M in his campaign account. (The new Statement of Candidacy will permit him to continue raising money.)
Meanwhile, the Republicans are already jockeying to take him on in the next election.
The National Republican Senatorial Committee ("NRSC") - which spent more than $8.7M attacking Kelly in the just ended campaign - has already begun recruiting Arizona Governor Doug Ducey to oppose Kelly in 2022.
Chris Hartline, the incoming Communications Director for the NRSC, tells Arizona's Politics that “Senator (Rick) Scott has a good working relationship with Governor Ducey. As NRSC Chairman, Senator Scott’s goal is to recruit good candidates around the country who can raise money and get their message out. Starting in January, he will by hyper-focused on that goal.” Ducey's 2nd - and final - term as Governor concludes in two years and he has long been thought to be eyeing the Senate seat. 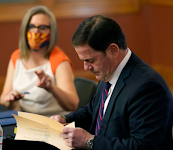 In fact, Monday's very high profile Twitter war between Ducey and outgoing President Donald Trump may have been the first public battle for the GOP nomination for that Senate seat. As part of his continuing effort to undermine confidence in the country's election laws and administration, Trump blasted Ducey by name for certifying Arizona's election results. (He did not mention Arizona's Republican Attorney General - Mark Brnovich.) The President then fired a fusillade of derisive tweets at the governor he had recently called "a great Governor and a great friend of mine."
Ducey fired back with a series of Tweets of his own, explaining why Arizona's elections were fair and the results accurate.
At the same time, Ducey was also being hammered by the Chair of the Arizona Republican Party, Kelli Ward. Ward traveled to Washington, D.C. earlier that day, and there were unconfirmed rumors that she was at the White House at about the same time that Trump began pounding Ducey.
In that same rally where Trump proclaimed his great friendship with Ducey, he also had noted that Ward is "a friend that is so loyal and strong" who would have been a Senator. He called her a "warrior and a fighter."
(Ward has also been angrily blasting Ducey for certifying the elections, and choosing to focus on him but not Brnovich.)
The AZGOP spokesperson would not confirm to Arizona's Politics whether Ward was with the President at the White House, who else she might have met there, and whether she was there on AZGOP business.

However, Ward has already made it clear that she would like to be in the U.S. Senate, having run for the Republican nomination twice, in both 2016 and 2018. (McCain beat her with 51% in a multi-candidate primary in the former, and McSally won 54% in a two-way primary in the latter.)
Ward also could be preparing to run for a U.S. House seat, as Arizona will be gaining a 10th Congressional seat next year. Her term as AZGOP Chair ends next month, and it would be unlikely to run for office as Chair of the party, so an announcement is likely sometime within the next several weeks.
Given the current battle for control of the Republican Party, it would appear that Ward and Ducey are destined to end up battling for the Republican nomination to face Mark Kelly. If so, the outgoing President may have just decided to try to play kingmaker and has chosen sides.
Longtime Republican political consultant Chuck Coughlin does not think it wise for any GOP candidate to stake his or her political fortunes "on this one guy who just lost Arizona".
"Absent a disastrous first two years of a Biden administration, that the President’s help in a primary will nearly guarantee a general election defeat," Coughlin says. He notes that Trump's enthusiastic supporters will be less likely to turn out for an election without the Trump name on the ballot, and that he will be less of a fundraising support once he is not residing in the White House.
Coughlin's entire astute analysis can be found in this sidebar article.
Kelly Stmt of Candidacy by arizonaspolitics on Scribd
*
If you would like to show your appreciation for Arizona's Politics reporting, please consider donating to our pool to support OTHER journalism-related nonprofits. http://bit.ly/AZpDonate
We welcome your comments about this post. Or, if you have something unrelated on your mind, please e-mail to info-at-arizonaspolitics-dot-com or call 602-799-7025. Thanks.
Posted by Mitch M. at 10:25 PM