BREAKING, "MISSED IT BY *THAT* MUCH: New Arizona Senator Mark Kelly Raised $99.4M During Campaign

Arizona's newest Senator nearly broke the 9-figure mark in campaign fundraising. Your contribution almost might have put him over the hump, as Mark Kelly's campaign raised $99.4M as of Election Day.
That figure dwarfed the $73M raised by his Republican opponent, Martha McSally - and she had the benefit of being in the office.
Kelly also took office this week knowing that he has $1.2M already in the bank for his re-election campaign in just two years. (He is serving the last two years of the late Sen. John McCain's six year term.) Arizona's Politics wrote about that upcoming battle here. 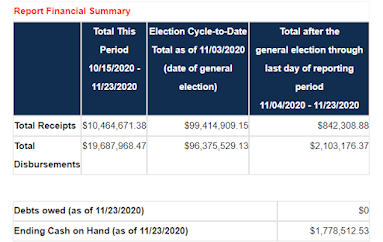 3:30pm: BREAKING: McSally Spent $67.5 MILLION In Losing Effort, Has $476,000 Left In Account
In the most expensive campaign ever in Arizona's history, Martha McSally lost her bid to win her U.S. Senate seat while spending a total of $67,498,294.30. (That does not include the tens of millions spent by outside groups to benefit her bid.)
After paying off late-incurred bills, McSally has $476,000 left in her campaign account, which could be used for future campaigns or refunded - but may not be used for personal purposes.
McSally narrowly lost to Mark Kelly (D), who was sworn in this week to serve out the remaining two years of the late John McCain's Senate term. His post-general finance filing has not yet been made publicly available. 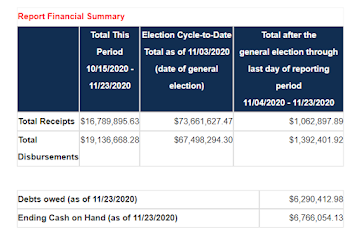 If you would like to show your appreciation for Arizona's Politics reporting, please consider donating to our pool to support OTHER journalism-related nonprofits.
We welcome your comments about this post. Or, if you have something unrelated on your mind, please e-mail to info-at-arizonaspolitics-dot-com or call 602-799-7025. Thanks.
Posted by Mitch M. at 3:48 PM