Former Arizona Rep. Don Shooter tried to supplement his counsel's arguments to the Arizona Supreme Court, but was rebuffed. The brief interaction occurred after the Justices grilled both sides about whether former House Speaker J.D. Mesnard had immunity while expelling Shooter for sexual harassment charges. 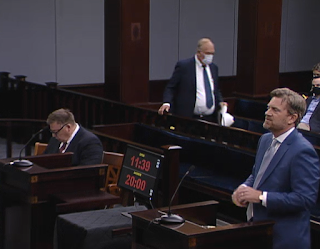 Shooter claims that Mesnard defamed him and lost his legislative immunity when he edited and released the investigative report in 2018, and when he then issued a press release explaining his actions to expel. Mesnard's counsel told the Justices that "he was Speaker and he was doing something that is immediate" and therefore the absolute immunity should apply to both the report and the release.

The one thing that both attorneys seemed to agree on, albeit for different reasons, is that Mesnard did not get special immunity coverage because of his role as Speaker. Several of the Justices pressed the idea, and Justice Bill Montgomery finally told a very hesitant Stephen Tully (representing the Mesnards) that "these aren't gotcha questions".

Philip Byler represented Shooter and tried to emphasize that Mesnard was "making it up (as he goes along) and that's why he should not be having immunity." Justices seemed equally frustrated with many of his responses, and Byler closed by warning the Court that "the facts of this case are pretty ugly - do you want that absolutely immune?"

Justice Ann Timmer repeatedly asked why the press release should not be covered by the Arizona Constitution's immunity provisions, and mused whether Shooter's position would force Arizonans to watching hours of ACTV (Arizona Capitol Television) to know what their lawmakers were doing.

Chief Justice Robert Brutinel thanked the attorneys at the close of arguments. Shooter then started speaking up, although it was not audible on the livestream. Brutinel shut him down, saying we are not hearing from you, Mr. Shooter, this argument is done. (Shooter can be seen moving down to the front row during Tully's arguments, above.)

There was no decision below on whether Mesnard actually defamed Shooter in his characterization of the report. This appeal is strictly on the immunity issue. The decision will be made by five of Arizona's seven Justices, as both Andrew Gould and James Beene did not participate.

If you would like to show your appreciation for Arizona's Politics reporting, please consider donating to our pool to support OTHER journalism-related nonprofits.
We welcome your comments about this post. Or, if you have something unrelated on your mind, please e-mail to info-at-arizonaspolitics-dot-com or call 602-799-7025. Thanks.
Posted by Mitch M. at 11:28 AM