"Behave like grown-ups." That was the wish made by Democratic Rep. Tom McGovern, in reference to the group of disgruntled Republican Representatives who are intentionally slowing down the process in the Democratic-controlled House. Arizona Rep. Andy Biggs (R-CD5) is the face of that group. 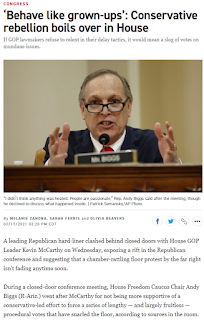 Specifically, McGovern was wishing that House Minority Leader Kevin McCarthy would tell the Biggs-led group to act like grown-ups. Here is the Politico article featuring Biggs and discussing the internal GOP rift between Biggs' group and McCarthy's leadership which boiled over earlier today. It includes Biggs taking a not-so-subtle dig at the McCarthy-led delegation who went to the U.S.-Mexico border this past week.
Sources told Politico that "Biggs responded that some members have been visiting the border for years and didn’t just show up there recently."
For his part, after the meeting, Biggs told reporters that “I didn’t think anything was heated. People are passionate. If we won’t use every procedural tool in the toolbox we have … yes, that frustrates me.” Biggs added that, as a member of the minority party, “You’ve got to get in the way and try to slow things down as much as you possibly can.”
Those slowing techniques include "requesting recorded House votes on non-controversial bills and forcing votes on motions to adjourn."
If you would like to show your appreciation for Arizona's Politics reporting, please consider donating to our pool to support OTHER journalism-related nonprofits.
We welcome your comments about this post. Or, if you have something unrelated on your mind, please e-mail to info-at-arizonaspolitics-dot-com or call 602-799-7025. Thanks.
Posted by Mitch M. at 1:37 PM