Arizona Rep. Andy Biggs led a group of 14 Republicans opposing a resolution condemning last month's military coup in Burma (also known as Myanmar). Rep. Paul Gosar could not bring himself to vote "no" and instead voted "present". 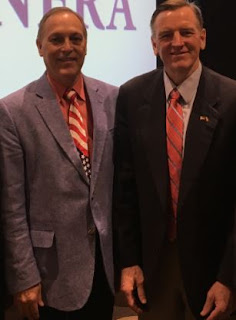 The final vote was 398-14, and Gosar was the sole abstention.
Gosar (R-CD4) has not yet made public his reasoning, but Biggs (R-CD5) posted a video explanation. Biggs worries that the resolution is setting ourselves up to be make Burma another Afghanistan and becoming "the military police for the entire world."
"The resolutions won't stop the military junta. I condemn the violence, I condemn what's happening there. But we have to understand, passing these resolutions can't be a way to put our foot in the door in Burma. There are other solutions." He did not suggest what those solutions might be.
The text of the resolution, of which Arizona Rep. Ruben Gallego (D-CD7) was among the original bipartisan group of co-sponsors, is below.
This resolution came up for a vote as U.S. diplomats are having a tense meeting with Chinese counterparts. It is not clear whether China is backing the Burma coup, but the Communist nation did block a U.N. Security Council resolution condemning it.
So, Biggs and Gosar uncomfortably find themselves on the same side of the issue with China on the same day when conservative media are blasting the Biden Administration's for its meeting with China.
If you would like to show your appreciation for Arizona's Politics reporting, please consider donating to our pool to support OTHER journalism-related nonprofits.
We welcome your comments about this post. Or, if you have something unrelated on your mind, please e-mail to info-at-arizonaspolitics-dot-com or call 602-799-7025. Thanks.
Posted by Paul at 2:07 PM