BREAKING: New Invest In Ed-related Referendum Filed; And, Now There Are Six Petitions Hitting the Streets

The newly-renamed "Invest In Arizona" coalition has filed its third (and likely, final) referendum application with the Secretary of State. Arizona voters are being asked to sign a total of six petitions to refer laws passed by the Legislature to the November 2022 ballot.

In 2020, Arizona voters approved the Invest In Ed initiative (aka "Prop 208"), which raises monies for education by adding a surcharge to wealthier taxpayers. The Legislature and Governor passed several workarounds last month to un-do the funding mechanism. The newest Invest In Ed-related referendum targets SB1783, which creates a new credit for an expanded definition of small business taxpayers to offset the Prop. 208 surcharge.
The legislative budget analysts estimate this law would reduce Invest In Ed revenues by more than $262M each year.

In touting his signature on the bill, Governor Doug Ducey said "After a year as tough as the last, we should not be raising taxes on our small businesses — we should be cutting their taxes. That’s exactly what Senate Bill 1783 does." He did not mention either the impact on Prop. 208 nor that the new Arizona definition of "small business" includes anyone who reports interest or dividends. (This means that any high income taxpayer with any stock dividends or interest suddenly becomes a "small business" and qualifies for the new offsetting tax credit.)
Invest In Arizona has already begun collecting signatures to stop two other related measures - portions of SB1827 and SB1828.
In addition to those three petitions, a group named "Arizona Deserves Better" is collecting signatures on three separate petitions to un-do a slew of voting- and election-related provisions passed during the recently-ended legislative session. 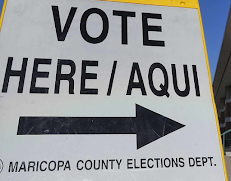 One ADB supporter explained to Arizona's Politics that this is a matter of "democracy integrity", and that passing measures which make it more difficult to vote without trying to fix an actual integrity issue is harmful to the election process.
The referendum groups have until September 28, 2021 to turn in at least 118,823 valid petition signatures. For any or all of the six targeted laws that they do successfully refer to the 2022 general election ballot, that measure would not go into effect unless voters pass it.
If you would like to show your appreciation for Arizona's Politics reporting, please consider donating to our pool to support OTHER journalism-related nonprofits.
We welcome your comments about this post. Or, if you have something unrelated on your mind, please e-mail to info-at-arizonaspolitics-dot-com or call 602-799-7025. Thanks.
Posted by Mitch M. at 4:37 PM