Arizona Rep. David Schweikert (R-CD6) is set to endorse Matt Salmon in the crowded GOP field for Governor. Politico notes that the two served in Congress together and have the Freedom Caucus in common. They also represented neighboring districts.
Salmon (and the other leading Republican contenders) spoke at the Trump Rally in Phoenix this past weekend. He followed reported frontrunner Kari Lake, repeatedly attacked the "fake news media" and "liberal elites", and passionately declared that "God is on our side".
Although 15 Republicans have filed Statements of Interest to run for the position being vacated by Doug Ducey, Salmon is among the five considered to be leaders for the nomination. (Secretary of State Katie Hobbs is considered the strong Democratic frontrunner, although there are other contenders.)
(For video, click here or on picture) 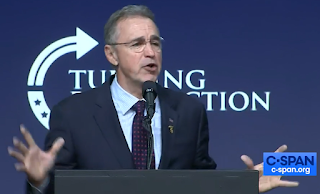 If you would like to show your appreciation for Arizona's Politics reporting, please consider donating to our pool to support OTHER journalism-related nonprofits.
We welcome your comments about this post. Or, if you have something unrelated on your mind, please e-mail to info-at-arizonaspolitics-dot-com or call 602-799-7025. Thanks.