TEXTS DON'T LIE: Yes, Maricopa County, There IS Another Election THIS YEAR...For Most Of You (READ: list of local jurisdictions)

Most Maricopa County voters are on the PEVL*, and many signed up last year for text and email updates about their ballots. That means that A LOT of these observant voters were mystified yesterday when they received a notification from Maricopa County Elections saying their "ballot is being prepared. It will mail on 10-06-2021."
Arizona's Politics heard from about a dozen different people. (And, I was most mystified because I had not received such a text purporting to be from Maricopa County Elections. Until 8:52pm, that is.)
After late night messages to and from the county and Recorder Stephen Richer, and several conversations today, we were finally able to get the complete list of which cities/towns and school districts were going to be asking their residents to vote in this off-year election. Without mapping out the sometimes overlapping jurisdictions, it is safe to say that most of the county's voters will be getting a ballot in October.
Previously, the Recorder's website listed all of the voting jurisdictions. However, curious voters were unable yesterday to access that list. Here it is: 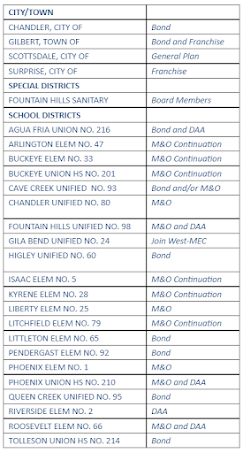 Thanks to Recorder Stephen Richer and Elections Department Communications Director Megan Gilbertson for helping get us the complete list.
And, even if you are not on the PEVL, keep an eye on your mailboxes in October, because this election will be by MAILED BALLOTS ONLY.
*PEVL remains unchanged, for now. The Legislature/Governor's new law removing the permanent from the early voting list does not go into effect immediately. Opponents are circulating referendum petitions to put it to the ballot in 2022; if they obtain enough, it will not go into effect unless voters approve it in November 2022. (And, they *would* receive a ballot for that election if they are on the list.)
If you would like to show your appreciation for Arizona's Politics reporting, please consider donating to our pool to support OTHER journalism-related nonprofits.
We welcome your comments about this post. Or, if you have something unrelated on your mind, please e-mail to info-at-arizonaspolitics-dot-com or call 602-799-7025. Thanks.
Posted by Mitch M. at 3:53 PM