McCain, Kelly Both On NBC's Meet the Press On Sunday

Arizona continues its over-sized presence on national Sunday news shows - and, on the national political scene in general - this weekend, as senior Senator John McCain (R-AZ) and ret. Space Shuttle Commander - and husband of ret. Rep. Gabrielle Giffords (D-AZ) - both are interviewed on NBC's Meet the Press. 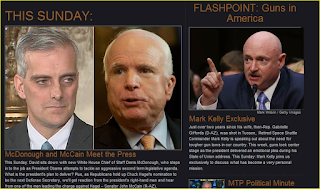 McCain will primarily be questioned about the ongoing drama surrounding the nomination of former friend and GOP colleague Chuck Hagel for Secretary of Defense.  McCain joined his fellow Republican Senators in opposing the nomination in the Armed Services Committee and in opposing bringing it to a vote in the full Senate, but he did defend Hagel's integrity when Sen. Ted Cruz (R-TX) was questioning whether Hagel had received speaking fees from "radical and extreme groups".

McCain was among the Republican Senators at the forefront of refusing to allow the nomination to be brought to the floor for a vote this week, stating that he and others still had questions about the President's knowledge and actions during the Benghazi attack.  McCain has signaled that - even though the Administration did not appear to further answer any of the questions - he would support voting on the nomination after the Senate returns from its week-long recess.  (Expect David Gregory to question him about this apparent gamesmanship.)

Mark Kelly has become one of the most prominent voices in the front-and-center debate on reducing gun violence.  Kelly and Giffords formed Americans for Responsible Solutions to support elected officials/candidates who support measures such as universal background checks.  Here is the ad that Kelly and Giffords planned to air earlier this week surrounding President Obama's State of the Union address.

While Kelly and McCain have been Arizona's* two most prominent voices on Sunday morning news shows so far this year, several other Grand Canyon Staters have taken part in the Beltway tradition, easily outpacing what would be Arizona's per-capita representation on the national stage.  (I will do the numbers if challenged on this, but I am Nate Silver-confident in this statement.)

We welcome your comments about this post. Or, if you have something unrelated on your mind, please e-mail to info-at-arizonaspolitics-dot-com or call 602-799-7025. Thanks.
Posted by Mitch M. at 8:18 AM