The news about Arizona's health insurance premiums in the "Obamacare" Marketplace rising fast hit hard, and Senator John McCain - among other Republicans - was quick to jump on it.  However, in context, the benchmark plan in Arizona is still lower than most other places.

In addition, the HHS analysis apparently overstated the benchmark jump in Phoenix, by more than 2%.

Today's news is based on a summary snapshot provided by the federal HHS (Dept. of Health and Human Services), which did not list actual premiums in its snapshot; it only listed percentage increases, as the Arizona Republic's article properly noted.

Last year, Arizona's Politics reported on the 10% DECREASE in premiums for Arizona's benchmark plan. That report was based on actual premiums, and showed that the monthly premium dropped from $197 to $177.

But, Arizona's Politics again went on the Healthcare.gov website to check out the benchmark plan for itself. Here's what you find: 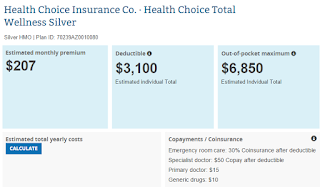 HOWEVER, when you consider the 2014--->2015--->2016 long term trend - which helps flatten out the volatility in how the insurance companies are changing their plans and premiums - you find the average annual increase is 2.5%.

Of course, the benchmark plan is NOT the average plan for the average consumer; rather, it is a snapshot of the market used to calculate how much of an assistance credit that the low-income consumer receives from the federal government if they choose a higher-priced plan.  Therefore, the value of using it as a way of measuring how much consumers' premiums have increased (or, decreased) is very limited.

In comparing Phoenix to the rest of the country, Arizona's Politics is not going to perform similar calculations for cities across the nation.  However, to note that Phoenix's Marketplace premiums are still lower than most sampled cities in the other 49 states, you can peruse this 2015 chart.


We welcome your comments about this post. Or, if you have something unrelated on your mind, please e-mail to info-at-arizonaspolitics-dot-com or call 602-799-7025. Thanks.
Posted by Mitch M. at 6:04 PM