Politico is reporting this morning that Arizona Senator John McCain (R-AZ) boosted his campaign warchest in the 3rd quarter to $4.9M - up from $4.5M.  They also note that his $1M+ raised is LESS than he raised in either of the 1st two quarters of 2015.

(Arizona's Politics reported last quarter about his slide from 1Q15 to 2Q15, and that $1.1M of the cash on hand is from his 2008 Presidential campaign.) 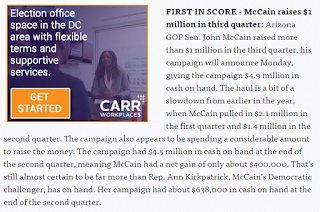 When the report is officially filed (deadline is the 15th), Arizona's Politics will report on it further.

We welcome your comments about this post. Or, if you have something unrelated on your mind, please e-mail to info-at-arizonaspolitics-dot-com or call 602-799-7025. Thanks.
Posted by Mitch M. at 10:30 AM