WATCH: Sen. McCain Comes To University of Phoenix' Defense, After Defense Dept. Decision To Place Them On Probation

Arizona Senator John McCain (R-AZ) came to the defense of Arizona-based University of Phoenix on the Senate floor this afternoon, blasting the Defense Department, the Center for Investigative Reporting and especially Sen. Dick Durbin (D-IL) in the process.

University of Phoenix was placed on probationary status by the Department of Defense because it used official Defense Department seals on "challenge coins" which were given to servicemembers who were potential UOP students.

McCain painted Durbin's efforts encouraging the DOD as part of his "shameful...vendetta" against for-profit institutions, and as part of his "well-known record of not supporting the men and women who are serving in the military." 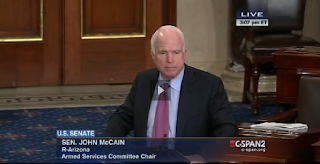 Here are links involved in getting to know more about this issue:
1) Letter from McCain and Sens. Jeff Flake (R-AZ) and Lamar Alexander, dated 10/22/15
2) "University of Phoenix put on probation over its military recruiting," from Center for Investigative Reporting, dated 10/8/15
3) Statement of DOD, 10/8/15


We welcome your comments about this post. Or, if you have something unrelated on your mind, please e-mail to info-at-arizonaspolitics-dot-com or call 602-799-7025. Thanks.
Posted by Mitch M. at 4:52 PM