FEC filings show that most or all of GOP Presidential candidate Ted Cruz’s improperly-disclosed $545,000 personal loan in 2012 has effectively made its way into his his Presidential campaign via two different paths. The transactions arguably violated federal law in several different ways.


The New York Times reported late this afternoon that Cruz and his wife, Heidi, had received the 2012 loan from Ms. Cruz’s employer, Goldman Sachs.  The now-Senator’s Personal Financial Disclosure statements (2014 here, below) filed with the Senate show that the loan was actually made by the Cruzes to the campaign, using their credit line from Goldman Sachs. 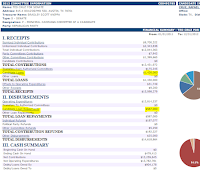 (From Goldman Sachs’ perspective, it was – and, is - always going to look to the more than $545,000 in Cruz investments/assets at Goldman Sachs to satisfy the loan, regardless of whether the Cruzes had lent it to the Senate campaign committee.)

In addition, The Ted Cruz For Senate committee spent more than $694,000 in 2015, mostly for Presidential campaign expenses. (Cruz has now temporarily suspended his 2018 Senate re-election campaign, pending the outcome of his presidential campaign.)

In fact, the Cruz Texas Senate committee served the role as a sort of shadow presidential campaign during most of 2015, picking up the tabfor airlines, charters, Iowa hotel rooms, etc. for Cruz.

On July 8, Cruz told the Federal Election Commission that he was permitted to run simultaneously for both the Presidency in 2016 and for Senate in 2018; therefore, he was permitted to solicit and retain contributions for the 2018 general election campaign. Six weeks later, on August 19, he notified the FEC that he was “has temporarily suspended” his 2018 Senate run.

***
BRIEF LEGAL ANALYSIS:
1) Was initial loan improperly disclosed to the FEC?  The thesis of the NYT article is that the loan reported to the FEC should have disclosed that the funds came from Goldman Sachs. Cruz and his campaign has acknowledged that that should have been disclosed, and that it was "inadvertent". It was almost an understandable error that it was not disclosed, because the Cruzes may have believed that they were, in effect, turning some of their investments in the GS account into cash.

2) Was the loan an improperly-large contribution from Heidi Cruz?  We now know the loan was at least $545,000. Ted Cruz is able to lend and/or contribute an unlimited amount of his own monies to the campaign. However, his spouse is not. (11 C.F.R. §110.1(i)) Assuming that the Cruz assets were jointly-held (their was no designation in Cruz's 2012 financial disclosure), the total assets needed to be greater than $1,090,000 for there to be even an argument; it was not - using the high end of each disclosed range, the assets were worth no more than $745,000.

Additionally, federal election law (11 C.F.R. §§100.83 and 100.33) would seem to indicate that Ms. Cruz is deemed to have contributed half of the loan. This violates the contribution limits.

3) Was the transfer from Cruz's Senate campaign committee to the Presidential campaign committee improper? The March 31, 2015 transfer from the Senate committee to the Presidential committee was in clear violation of federal election law, and the Cruz campaign sealed the violation by their filings. Cruz was actively seeking nominations for both the Senate and the Presidency beetween March 23, 2015 to August 19, 2015; In July, the campaign formally told the FEC that he was running for both because Texas law permits him to do so.

Regulations (11 C.F.R. 110.8) PROHIBIT the transfer of funds between the two campaigns: "No funds, goods, or services, including loans and loan guarantees, may be transferred between or used by the separate campaigns, except as provided in 11 CFR 110.3(c)(5)." 110.3(c )(5) does not provide Cruz an exclusion; rather, it also indicates that the transfer must not permit contributors to double max-out.

4) Was the use of Cruz's Senate campaign committee funds for expenditures that were obviously related solely to the Presidential campaign improper?  Funds contributed to a campaign committee are to be used in the campaign for that office. (52 U.S.C. §30114(a)) An argument could be made that building support among Republicans nationally (especially in non-adjacent Iowa) could benefit the Cruz Senate re-election committee, but it would be hard to keep a straight face. It could also be seen as a way of avoiding the prohibited transfer (see, above) to the Presidential committee.

We welcome your comments about this post. Or, if you have something unrelated on your mind, please e-mail to info-at-arizonaspolitics-dot-com or call 602-799-7025. Thanks.
Posted by Mitch M. at 11:31 PM

If the Cruz family took out a loan from their margin account and used the proceeds for political purposes, would there be further difficulties if they claimed the interest costs as an "investment expense" on their taxes?

Good question, Anon! I do suspect that the interest from the loan was reflected on their 1099 and that their accountants included it on their tax returns.

What do YOU think?

This sounds like an interesting position for a finance manager. The organization and the cause are definitely different and more noble than any of the typical finance positions out there!

The loan would have been perfectly find if they didn't go and do something to it in their new capacity! That's obviously going to create a lot of trouble for them even if they can pay the loan to Goldman back!