Today is campaign finance report filing day for both federal and state candidates. Arizona's Politics will attempt to make the key reports available throughout today, tomorrow (for the late night filings) and the next week (for the U.S. Senate campaign reports, which take additional time to be posted...for now). We will highlight some of the key figures.

(Candidates: If you would like to send a copy of your report directly to us, please use the "Mitch @ ArizonasPolitics.com" email address. Thanks.)

Regardless, the combined $4.8M in the candidates' bank accounts is dwarfed by the amounts being spent by Super PACs and other outside groups. Those "Independent Expenditures" totaled $5.7M in one 48-hour period last week.

*Arizona's Politics has deducted the $656k debts owed by the committee from the closing cash on hand figure. An inspection of those campaign debts indicates that they are mostly current bills that will be paid.

McSally for Senate 3q18 FEC by arizonaspolitics on Scribd


1:30pm: Rep. Kyrsten Sinema (D-CD9) raised $4.9M in the 7 1/2 weeks ended September 30. She spent $5.5M, leaving her with cash on hand for October and until Election Day of $2.1M. Sinema and House colleague Rep. Martha McSally (R-CD2) are locked in one of the most-intense, most-watched Senate battles in the nation


10am: Wendy Rogers, the Republican challenger in the swing district of #AZ01, hauled in 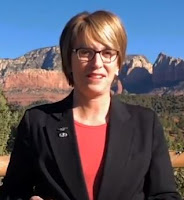 
Wendy Rogers 3q18 FEC by arizonaspolitics on Scribd
*Interestingly, she lent her campaign $8,000 on Sept. 27.

We welcome your comments about this post. Or, if you have something unrelated on your mind, please e-mail to info-at-arizonaspolitics-dot-com or call 602-799-7025. Thanks.
Posted by Mitch M. at 10:47 AM