New Arizona Senator Jon Kyl (R-AZ) gave a half-hour presentation on why his fellow Senators should confirm Judge Brett Kavanaugh to the U.S. Supreme Court, as new reports are inspecting Kyl's previous role as the Trump Administration's lead sherpa for the Kavanaugh nomination.

Kyl's 30-minute speech on the Senate floor began with him confirming what he had told to Arizona's Politics several months ago - that he had received no money for his efforts on behalf of Kavanaugh and the Administration. (He had also told Arizona's Politics that his sherpa responsibilities were done on his own time and not through Covington & Burling.)

He also answered a question that Arizona's Politics and others had been asking since the sexual assault allegations against Kavanaugh became public - that he had never heard of the alleged conduct before it became public.


"Just before his nomination was announced by the President, Don McGahn, the White House Counsel, called me in Arizona, and asked if I would serve as the sherpa for the nominee. The person to get him around the Senate, to introduce him to the Senators, follow up on any questions and so on. And, I agreed to do that and I also participated in some of the hearing preparation. This all occurred over about a five-week time.

"During this time, I was employed part-time by a Washington, D.C. law firm, but I want to be very clear that my assistance to Judge Kavanaugh was on my own time, free of charge, and in no way connected to the firm or any client of the firm. It was not a pro bono matter because I did not represent Judge Kavanaugh. It was simply to help him prepare for his hearing and to get him around the Senate to meet the Senators and to talk to them."

Kyl's comments notwithstanding, some questions remain about whether it is appropriate for Sen. Kyl to now be voting on the Kavanaugh nomination. Roll Call published an extensive article yesterday, suggesting that, at a minimum, he should be clearing his situation with the Senate Ethics Committee. And, as Arizona's Politics published recently, Kyl may have advised his former client - Judicial Crisis Network - on this court vacancy in 2017. 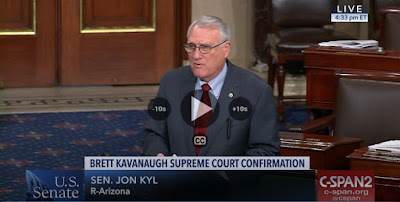 We welcome your comments about this post. Or, if you have something unrelated on your mind, please e-mail to info-at-arizonaspolitics-dot-com or call 602-799-7025. Thanks.
Posted by Mitch M. at 2:38 PM