27 hours after Arizona's Politics first asked the McSally office to explain why they are the only major campaign that does not pay payroll taxes/Social Security/Medicare/benefits, the Communications Director finally released a statement. (The statement was provided to NBC's Vaughn Hillyard*, and not to the other inquiring national reporters or Arizona's Politics, but that was probably just an oversight.)

Arizona's Politics first reported yesterday about its review of the 20 major party candidates running in the 10 most expensive 2018 Senate campaigns. McSally is the only one who reports zero employees; instead, paying them as independent contractors. Even though her campaign declined to respond before it was published, the article presented possible reasons for the "unusual nature" of the set-up and compared the "payrolls" between the McSally and Sinema campaigns.

As the article received more and more attention from local and national media, Communications Director Torunn Sinclair finally issued her statement at approximately 5pm, tonight. The full statement is published below, and it throws a lot into the mix. Sinclair leads with a seeming non-sequitor about the high amount of pay that she and the others are receiving; that IS somewhat relevant because it not only gives the independent contractor money to choose an ACA policy (etc), but it gives them money to pay the self-employment taxes that the campaign would otherwise be withholding and paying the employer's share.

However, as many readers and social media users pointed out, federal and state laws do not give a campaign (aka business) the option to treat staff as independent contractors or employees. Instead, there are (somewhat) fuzzy standards regarding how much control the business has over the individuals they are contracting with. Yesterday's article also addresses this aspect, but here are additional cites from the IRS and the Internal Revenue Code.

Finally, we will note that Sinclair attempts to attribute the questions she was receiving - and yesterday's article - to "the Sinema campaign" and its efforts to distract from the border issues that McSally, the President and other Republicans are trying to emphasize. The Sinema campaign had absolutely nothing to do with our article. (In fact, they did not respond to our emails requesting comment, either.) 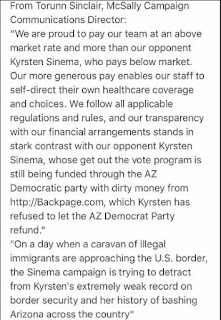 *Vaughn is from the Valley, received reporting notoriety here in high school and at ASU's Cronkite School, before moving on to bigger things at NBC. We first took note of his work 8 years ago, for great work on a Russell Pearce Fact Check despite less than awesome support from the Republic.

We welcome your comments about this post. Or, if you have something unrelated on your mind, please e-mail to info-at-arizonaspolitics-dot-com or call 602-799-7025. Thanks.
Posted by Mitch M. at 6:01 PM