January Contreras, the Democratic candidate for Arizona Attorney General, is in New York tonight for a high dollar fundraiser headlined by Hillary Rodham Clinton. Contreras is one of four candidates being supported by the DAGA fundraiser, reportedly because she Democrats believe that current AG Mark Brnovich is vulnerable.

The ticket levels range from $1,000 to $25,000 for the event, and it presumably means that the Democratic Attorneys General Association will spend some money in Arizona in the closing weeks of the campaign.

A spokesperson for the Republican Attorneys General Association taunted Clinton, Contreras and the Democrats, suggesting that Contreras should ask the former Presidential candidate (etc) to campaign for her in Arizona.

DAGA and RAGA  filed their 3rd quarter reports with the IRS yesterday, and the much better-funded GOP organization is greatly outspending their Democratic counterparts, $7.4M to $1.8M. (Arizona-based contributions to RAGA are well in six figures, while DAGA received a total $450 from two individuals. APS parent company Pinnacle West contributed another $100,000 to RAGA.) 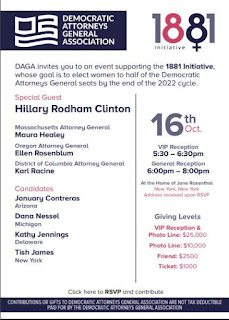 We welcome your comments about this post. Or, if you have something unrelated on your mind, please e-mail to info-at-arizonaspolitics-dot-com or call 602-799-7025. Thanks.
Posted by Mitch M. at 11:20 AM