The U.S. Supreme Court today rejected Motions to Expedite the other two appeals that have been filed by the Arizona GOP and Chairwoman Kelli Ward. Responses will be due later this week and later this month.

Last week, the Justices flatly rejected the AZGOP's effort (along with Texas Rep. Louie Gohmert) to get the highest court in the land to tell Vice President Mike Pence that he was not bound by the Electoral Count Act - in place since 1877 - because it was unconstitutional. As Arizona's Law detailed, Ward mislead supporters into thinking that the appeal had been filed before the January 6 counting of the Electoral College votes - thus making it appear that the Supreme Court's eventual rejection was unreasonable. (It was filed on January 6.) 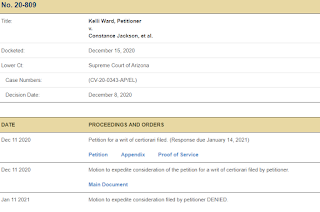 Today's rejections come in the Ward v. Jackson election contest appeal that had been dismissed by Maricopa County Superior Court Judge Randall Warner. That dismissal was affirmed by the Arizona Supreme Court, and the appeal to the U.S. Supreme Court had aimed to find a different portion of the Electoral Count Act unconstitutional (i.e. the safe harbor date).

AZGOP attorney Jack Wilenchik had filed the Motion to Expedite on December 11, along with the appeal, but it was not until one month later that the Supreme Court denied the motion. The defendants (Biden electors) and the intervenors (Secretary of State Hobbs, Maricopa County Supervisors and Recorder) have until Thursday to respond to the appeal. (aka petition for writ of certiorari).

Sidney Powell and Arizona attorney Alex Kolodin - lost the case in U.S. District Court and are trying to pair it with similar cases from Michigan, Georgia and Wisconsin. They are asking the Supreme Court Justices to order U.S. District Court Judge Diane Humetewa to un-do her dismissal and to force Arizona to "de-certify" the November 3 election results in favor of Joe Biden over Donald Trump.

The Motion to Expedite was late filed on December 18. Defendants have until January 28 to respond to the substance. (The AZGOP also has a concurrent appeal of this case before the 9th Circuit; however, they have not moved to expedite it and briefing will last into May.)

The Justices rejected similar motions to accelerate consideration in several other election-related appeals.
If you would like to show your appreciation for Arizona's Politics reporting, please consider donating to our pool to support OTHER journalism-related nonprofits.
We welcome your comments about this post. Or, if you have something unrelated on your mind, please e-mail to info-at-arizonaspolitics-dot-com or call 602-799-7025. Thanks.
Posted by Mitch M. at 3:10 PM