IT'S IN WRITING!: Sen. McCain To Hold FIRST D.C. Re-Election Fundraiser For 2016 Arizona Campaign; Has $1.1M In Bank From 2008 Presidential Run (FOLLOWING MONEY IN ARIZONA'S POLITICS)

While John McCain has officially wavered about whether he will seek a 6th term as U.S. Senator from Arizona in 2016, his campaign has sent out invitations for a $1,000/person Washington fundraiser saying that McCain "would be delighted to see you... for his first DC re-elect reception."

The invitation, reproduced below courtesy of the non-profit Sunlight Foundation's Party Time, calls for supporters to converge upon Johnny's (no relation) Half Shell on Tuesday, January 28 at 5:30pm.

Friends of John McCain held a fundraiser in New York in December - when he was up there for an appearance on a Sunday news show - however, the invitation noted he was only "consider(ing)" a new run.

While his campaign finance reports for the last three months of last year are not yet out, McCain's campaign already had more than $1.1 Million in the bank on September 30.  All of that has come from transfers from accounts associated with his 2008 Presidential campaign, and is not left over from his 2010 Senatorial campaign.  ($369,000 from "John McCain 2008, Inc." and $820,000 from the "McCain-Palin Compliance Fund, Inc.") 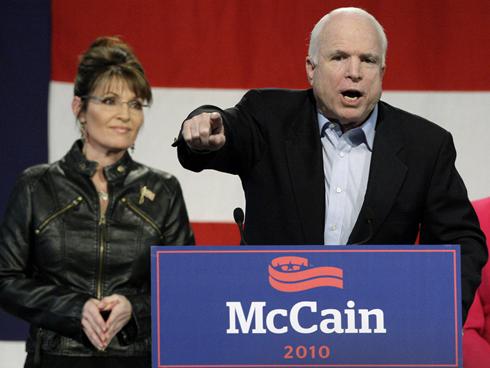 It is very possible that the Senator will concentrate more fundraising efforts than normal outside of Arizona, in light of this past weekend's overwhelming censure vote of McCain by precinct committeepeople making up the Maricopa County Republican Committee.


(If you hear of any upcoming fundraisers - McCain or otherwise - in Arizona, please forward them (anonymously or not) to Arizona's Politics.)

We welcome your comments about this post. Or, if you have something unrelated on your mind, please e-mail to info-at-arizonaspolitics-dot-com or call 602-799-7025. Thanks.
Posted by Mitch M. at 5:41 PM