She did not echo the view that is being expressed by several GOP U.S. House members in recent days that they support a path to legalization but not citizenship, but she made a plea for the House "to please listen to the border states; hear us out." 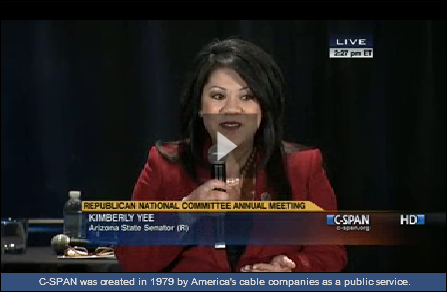 The theme of the panel was how the GOP needs to reach out to women and minorities.  In that vein, Yee's opening statement was about how Asian Americans need to see more people like themselves in the party and on the convention floor (Yee was a delegate in 2008).  She noted that Asian Americans should be in her party, and noted that they are "highly educated... higher wage earners, and for the most part they own their own businesses."

Yee was asked about to talk about her effective use of pro-life messages to resonate with voters.  She talked about how she had sponsored the struck-down Arizona 20-week ban bill that the U.S. Supreme Court declined to reconsider this month, and how the pro-life bills are the ones"that tug(s) at my heart strings."

Clicking on the picture above will bring you to the entire panel discussion.  The links below are to the four times that Sen. Yee had the microphone.

#1 Opening Statement re: Asian Americans
#2 You effectively use pro-life bills for outreach; talk about that.
#3 "WE NEED TO WRAP OUR ARMS CAREFULLY, DILIGENTLY AROUND COMPREHENSIVE IMMIGRATION REFORM."
#4 No war on women, "because here we are"

We welcome your comments about this post. Or, if you have something unrelated on your mind, please e-mail to info-at-arizonaspolitics-dot-com or call 602-799-7025. Thanks.
Posted by Mitch M. at 3:00 PM

the greatest plant in the universe is almost free, LET FREEDOM RING! 13

Senator Kimberly Yee runs Arizona and marijuana is her #1 target, look out Arizonans

20 years behind us southern states, sad and scary....nobody denies freedoms like the south, nobody…the top ten incarcerators on the planet are southern states...even if marijuana reforms did pass the republiCANTS in charge would deny you all your freedoms, centuries of practice...no matter though, we never planned on getting your backwards brethren from day one, half the country already but not one southern state, lol...not 1….the new generations are taking over in the south and they are nothing like their freedom denying parents, let’s ride…

AMERICA'S WAR ON DRUGS IS A WAR ON AMERICANS! 33