Jeopardy-style:  Arizona Rep. Trent Franks, Sens. Mitch McConnell and James Inhofe, and Liz Cheney.  Alex, who are the only four candidates* to whom former U.S. Secretary of Defense Donald Rumsfeld has contributed to - and, maxed out to - in this election style?

Rep. Trent Franks (R-CD8) has no Republican or Democratic challengers in his campaign for a 7th term in Congress, and has not been doing very much fundraising.  From the limited number of contributors on his 4th quarter campaign finance report, one name jumps out - that of the well-known former Defense Secretary. Rumsfeld had not contributed to the West Valley Congressman since 2008, but on December 4, 2013, he made a maximum $5,200 contribution (1/2 for the primary campaign, 1/2 for the general election campaign).

Franks raised most (57%)of his $49,415 in 4th quarter contributions from PAC's (political action committees), and now has $34,345 in the campaign bank acount.  This is extremely low compared to other incumbent Representatives, but Franks has no announced challengers for either the primary or general elections. 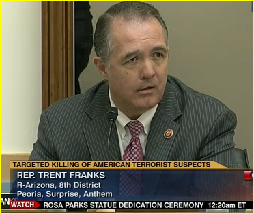 * The known knowns, reported thus far.  Mr. Rumsfeld might have made other, similar contributions in 4Q2013 that have not yet been reported or do not show up in the CRP database.  The contributions to McConnell and Cheney were made in 3Q2013.


We welcome your comments about this post. Or, if you have something unrelated on your mind, please e-mail to info-at-arizonaspolitics-dot-com or call 602-799-7025. Thanks.
Posted by Mitch M. at 9:36 AM