(UPDATE, 12:20pm: Sen. Kyl has confirmed to Arizona's Politics that he is ONLY working on behalf of the Administration for the nominee set to be announced tonight. And, that he will not be accepting any money for the guidance.

Exact quote from the Sherpa Extraordinaire: "My work on the last nomination was on behalf of a private group. I will be assisting the White House on this nomination...gratis.)

(Clarification, 7/10: Added "Lobbyist For..." to headline to make it clear that Sen. Kyl did not "sherpa" for the Gorsuch nomination. As he tells Arizona's Politics, "Our firm did some other work for a private client on his behalf." As the lobbying disclosure statements put it, Kyl and William Wichterman worked to "Support the confirmation of Neil Gorsuch to the U.S. Supreme Court."

Sen. Kyl also wished to make it clear that his free sherpa tasks with nominee Kavanaugh are in his personal capacity and not through the law firm.)

With today's White House announcement, Arizona's former Sen. Jon Kyl remains the go-to sherpa for the Trump Adminstration. But, he is also the man for the Judicial Crisis Network that pushes the Republican judicial agenda with millions of dollars of dark money. 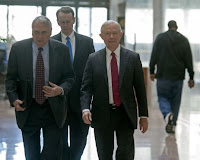 Kyl was the Trump Administration's lead sherpa to guide his former colleague Jeff Sessions through the nomination process for Attorney General. It is not clear whether that was a paid trek.

Kyl was then the co-lead lobbyist for the Judicial Crisis Network's Senate push on behalf of the Trump Administration's nomination of Neil Gorsuch to the U.S. Supreme Court. JCN paid $215,000 for those unofficial sherpa responsibilities. And, Kyl was hired by Gordon Sondland to pave the way for his confirmation as U.S. Ambassador to the European Union earlier this year.

It is not yet clear whether Sen. Kyl is taking on the sherpa task for the President's new nomination to the Supreme Court as a pro bono matter, or whether he will also be lobbying on behalf of JCN. Arizona's Politics has written about the dark money nature of the JCN in the past, and more recent reporting shows that it has been largely funded by one anonymous donor.

(see update, above) Arizona's Politics has requested more information from Sen. Kyl and Covington Burling (his law firm), and will update as necessary.

We welcome your comments about this post. Or, if you have something unrelated on your mind, please e-mail to info-at-arizonaspolitics-dot-com or call 602-799-7025. Thanks.
Posted by Mitch M. at 12:11 PM