WATCH: Rep. Lesko Opposing Paycheck Fairness Act As "Radical Proposal"
5:20pm: Arizona Rep. Debbie Lesko (R-CD8) spoke on the House Floor today against the Democrats' Paycheck Fairness Act. Lesko blasted the measure as being about "more litigation and trial lawyers" and pitched an amendment that would "restate the current law" to give parents more flexibility.

The Republicans' amendments were rejected and the bill passed, 242-187. (Seven Republicans joined all the Democrats in supporting it.)


Arizona's AHCCCS Work Requirement In Jeopardy After Court Decision
4:00pm:  In January, the federal government approved Arizona's proposal to impose a work requirement on persons receiving AHCCCS (aka Medicaid) benefits. That plan may be in jeopardy today after a U.S. District Court judge today ruled that the Trump Administration ignored the purpose of Medicaid in permitting Arkansas and Kentucky to add work requirements.

The judge again ruled that the Department of Health and Human Services ("HHS") had not "adequately considered" whether the requirements helps the states " furnish medical assistance to its citizens, a central objective of Medicaid." 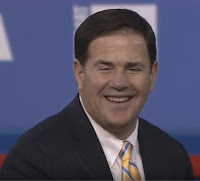 Arizona's requirement is set to go into effect next year. In reporting the Arizona approval in January, Arizona's Politics noted the celebratory comments of Governor Doug Ducey, who carefully stated that adding work requirements to receiving the health insurance benefits would be beneficial to Arizonans. "Employment and community engagement are proven to have a positive effect on overall health and well-being."

Arizona Congressman Tom O'Halleran promised at the time that he would fight the plan. "As we are seeing in Arkansas...hardworking families including veterans will lose their benefits and costs will skyrocket." In fact, the judge noted today that the states have not communicated effectively with their citizens and that only 1/8 had filed required documentation.

Arizona's Politics has reached out to Governor Ducey and Rep. O'Halleran, and will update as necessary.


OFF-TOPIC: Join our Diamondbacks Season Ticket Group
3:00pm: We've been part of a Diamondbacks season ticket group for 20 years now, and a couple of our members had life changes that prompted them to stop participating. We have two seats that are probably the best value in the ballpark. One share is 16 games over the 6-month season, and although we assign the games randomly, everyone is usually pretty accomodating for switches. If you are interested, email me, at Paul @ ArizonasPolitics.com (no spaces), and I'll send you more details.