UPDATE: Liburdi Recommended To Full Senate By Party-Line Vote
UPDATE: The Senate Judiciary Committee today recommended the appointment of Mike Liburdi to the federal bench for the District of Arizona, by a party-line 12-10 vote. 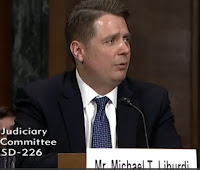 Governor Ducey's former general counsel will now await action by the entire Senate. And, that could take awhile as there are a number of nominations already awaiting action by the Republican-controlled body.

As reported previously by Arizona's Politics, Liburdi's appointment to the lifetime post went a different route than previous judicial appointments. For example, U.S. Magistrate Bridget Bade - who is also waiting for Senate approval for appointment to the 9th Circuit from Arizona - was vetted and recommended by Arizona's (Republican) Senators last year. Liburdi did not get such a recommendation, and then applied directly to the Trump Administration for the opening.

Bade was recommended by the Committee on a 17-5 vote. Similarly, there was one bipartisan vote on a judicial nomination today.


WATCH/READ: House Approves Grijalva Amendment Requiring Election Day Drop-Off Of Early Ballots
(Update, 3/8: House passed HR! this morning on a strict party line vote. (No defections from either party.)
2:30pm:Arizona Rep. Raul Grijalva (D-CD3) successfully amended the Democrats' election reform bill this afternoon, to require states to permit voters to drop off early ballots to a polling place on election day. If HR1 was approved by both Houses and signed by the President, it would halt Arizona Republicans' efforts to end E-Day ballot drop-offs.

Republicans in the House did not oppose Grijalva's amendment, after asking if it had anything to do with ballot harvesting. Grijalva assured him that it did not.

Arizona's pending SB1146 would eliminate Election Day drop-offs, partly as a reaction to the unusually suspensful post-Election Day counts this past November.

Senate Majority Leader Mitch McConnell stated yesterday that he would not permit HR1 to reach the Senate Floor if/when it passes the House.

Here is the text of the Amendment that passed by a voice vote:

Page 142, insert after line 3 the following (and redesignated

``(g) Permitting Voters to Return Ballot to Polling Place on

Date of Election.--The State shall permit an individual to whom

that date to a polling place.''

Here is the video of the discussion:

We welcome your comments about this post. Or, if you have something unrelated on your mind, please e-mail to info-at-arizonaspolitics-dot-com or call 602-799-7025. Thanks.
Posted by Mitch M. at 2:42 PM