WATCH McSally: "I Am Fully Locked In Like A Missile On This Target" - Sexual Assaults In the Military

Arizona Senator Martha McSally (R-AZ) made the most of her 5 minutes questioning acting Defense Secretary Patrick Shanahan this morning. You can watch the full video below.

First, she got him to affirm in public that he had assured her that Arizona military funding would not be impacted by President Trump's border wall emergency declaration, just ahead of the Senate's vote to disapprove the declaration. She had previously indicated reassurances from the Pentagon and the White House, but Arizona's Politics (and others) had asked whether they were written or verbal assurances.

Next, she stated that "I am fully locked in like a missile on this target", with the target being the problem of sexual assaults in the military. McSally made national headlines last week when she testified that she had been raped by a superior officer during her service in the USAF. She indicated she's been thinking about the subject a lot and "moreso over the past week", and she prompted Shanahan to commit to partnering with her and "we are going to take a fresh look and tackle this over the next 45 days."

"Can I get your commitment you'll work with me on that?" Shanahan's (only possible) response: "Senator, you have my commitment." General Joseph Dunford, the Chair of the Joint Chiefs of Staff, answered affirmatively, as well.

McSally also noted that she is setting up a summit on the issue with the Secretary of the Air Force and leaders in that branch. (Heather Wilson is retiring at the end of May.)

Finally, Senator McSally prompted the Secretary to answer that ceasing joint exercises with South Korea's military will not harm the readiness of the forces on the peninsula in case of future conflict with North Korea. President Trump ordered the annual exercises to end, as part of his summit(s) with North Korea's Kim Jong Un. 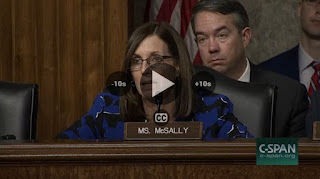 We welcome your comments about this post. Or, if you have something unrelated on your mind, please e-mail to info-at-arizonaspolitics-dot-com or call 602-799-7025. Thanks.
Posted by Mitch M. at 11:09 AM