The Paradise Republican Women's Club ("PRWC") is holding their annual meeting the Saturday after the biggest election of their lives (per Romney), and they have chosen former Maricopa County Attorney Andrew Thomas to be their Featured Speaker.  Nothing wrong with that, he was not banned from public speaking - or, even public office - for life.  However, you would think that they would at least acknowledge that he was disbarred (not permitted to practice law) nine days after he resigned to run for Arizona Attorney General (in 2010).

The PRWC put up an updated (2012) bio of Thomas, noting that the U.S. Department of Justice "exonerated" Thomas (and Sheriff Joe Arpaio) and "specifically rejected allegations of wrongdoing that a state bar panel made against Sheriff Arpaio and Andrew Thomas."  Very cleverly worded, and totally avoiding the fact that the bar panel adjudicated those "allegations" and found them troubling enough to disbar Thomas; Thomas chose not to appeal the nearly-unprecedented action. 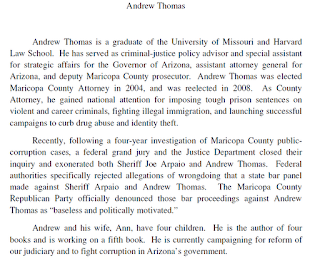 Other than speaking to the group, the biography notes that Thomas is working on two different things: writing his fifth book, and "campaigning for reform of our judiciary and to fight corruption in Arizona’s government."  He promised the latter in his statement declining to appeal the disbarment; however, he has not released any specific ideas for reform. (He was wise enough not to publicly weigh in on Prop. 115.)


We welcome your comments about this post. Or, if you have something unrelated on your mind, please e-mail to info-at-arizonaspolitics-dot-com or call 602-799-7025. Thanks.
Posted by Mitch M. at 12:26 PM