VOTE COUNT WATCH: 631,000 Arizona Ballots To Be Checked, Counted; National Journal Updates On Arizona's CD2 and CD9, Points Out Why Barber May Have Upper Hand

The National Journal just ran an update on the seven still-unresolved House races across the country.  Arizona trails California in that contest, but uncounted ballots could change that.  The two Arizona races still being watched are the CD2 contest between Rep. Ron Barber (D) and Martha McSally (R), and the CD9 battle between GOP nominee Vernon Parker and Dem. choice Kyrsten Sinema.

The new piece of analysis that the National Journal piece brings to the table is that the last two elections for CD2 (formerly CD8, with minor changes) have both broken the Democrats' way when early and provisionals are counted in Tucson (other counties are less critical than Pima).  That may very well be a pattern that indicates that Barber may re-pass McSally in the tally.

Here are the vote totals as of 2:24pm this afternoon: 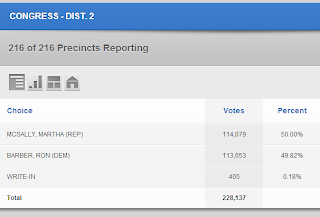 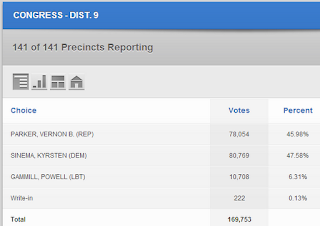 We welcome your comments about this post. Or, if you have something unrelated on your mind, please e-mail to info-at-arizonaspolitics-dot-com or call 602-799-7025. Thanks.
Posted by Mitch M. at 3:39 PM