Arizona's vote count is ready for certifying, as Maricopa County finished tallying provisionals, and a few thoughts occurred to Arizona's Politics.  The statewide finals can be seen here.

1) The U.S. Senate lead for Rep. Jeff Flake kept shrinking to the final count.  He ended up with a 49.2%-46.2% win (68,000 votes out of 2.245 million cast) over former U.S. Surgeon General Richard Carmona.  That not-quite-majority was a bit surprising considering that the Presidential contest in Arizona favored the GOP nominee Mitt Romney over Pres. Barack Obama 53.5%-44.5%. 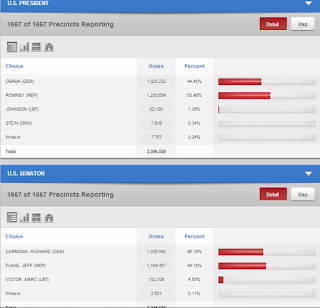 2) Glad to see Secretary of State Ken Bennett and others seem to be serious about working on ways to make our voting process better.  (That can't help but make the vote-counting process better, too.)  I plan to continue pursuing a few of the ideas I have raised previously.)

3) Much ink and many bytes have been spent discussing the 5-4 Democratic edge for Arizona's House delegation.  Now that we have finished the vote-counting, we can look at the total number of votes Arizonans cast for Arizona's 9 Democratic House candidates and 8 GOP candidates (the Republicans failed to field a candidate in the CD7, against juggernaut Rep. Ed Pastor).

While it is not a definitive statistic - the quality of candidates put up by a minority party in a district that is "safe" for the other party can vary widely - it is worth noting that Republican House candidates received approximately 184,000 more votes than the Democratic candidates.  That is approximately an entire district's worth of votes; the average AZ CD saw 225,000 votes cast.

That Arizona winds up with a slightly-blue House delegation seems slightly more surprising given the totals - as well as the totals of the race for President, Senate, voter registration figures, etc.  But, not as surprising when one remembers the GOP howling about the redistricting maps adopted by the Independent Redistricting Commission.

4) Both Arizona Republic and Phoenix New Times columnists are noting that longtime Maricopa County Sheriff Joe Arpaio barely crossed the 50% threshold in his re-election race.  Less noted is that the 50.7% mark for GOP Arpaio is EXACTLY the same that longtime Democratic Pima County Sheriff Clarence Dupnik received in the heart of Baja Arizona country.  Arizona's Politics found no similar columns in the daily or weekly papers talking about the closeness there (although I will be keeping my eyes open this weekend).

Given that the Democrats have a significant edge in Pima, it would seem that both big-county Sheriffs are losing some altitude among their (previously) faithful.

We welcome your comments about this post. Or, if you have something unrelated on your mind, please e-mail to info-at-arizonaspolitics-dot-com or call 602-799-7025. Thanks.
Posted by Mitch M. at 4:16 PM