The U.S. House of Representatives voted this afternoon to pass the $638 Billion Defense Department Reauthorization bill, and not surprisingly, Arizona's split delegation split its votes - 4 in favor, 5 opposed.  However, the split was NOT along party lines.

The House voted overwhelmingly, 315-108.  Democrats were divided but a majority supported the measure, 103-90, but only 18 Republicans opposed it compared to 212 who voted "aye". 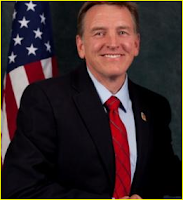 Arizona's Democrats mirrored the rest of their caucus, but the GOP delegation flipped that trend on its ear.  The five Democrats split 3-2, with the two more left-leaning members (Reps. Raul Grijalva and Ed Pastor) opposing it.  On the Republican side, only Rep. Trent Franks voted "aye".

Rep. Paul Gosar (R-CD4) was the only GOP member to issue a statement trumpeting his opposition.  He indicated his opposition was based on his disagreement with the amendments that passed regarding protecting American citizens from indefinite detention.

“In voting against the NDAA, I kept my promise to uphold and protect the Constitution. I will not vote to continue policies that trample on our constitutional rights.”

The Goodlatte (R-VA) amendment on the subject narrowly had passed, 214-211.  Gosar voted against it.  Goodlatte says his amendment, which ensures that suspected terrorists who are detained are entitled to a habeas corpus review, should alleviate Americans' concerns about indefinite detention.

Rep. Ron Barber (D-CD2), who sits on the Armed Services Committee which worked on this bill, praised it.  "This legislation will ensure that our nation’s defense remains strong and that the men and women who serve our nation are better compensated.  It also includes continued funding for the Southern Arizona companies that provide essential high-tech equipment to the Department of Defense."

We welcome your comments about this post. Or, if you have something unrelated on your mind, please e-mail to info-at-arizonaspolitics-dot-com or call 602-799-7025. Thanks.
Posted by Mitch M. at 5:32 PM