(June 13 update: Arizona's Politics has posted an update with the transcript of the relevant exchange between Reps. Franks, Nadler, Lofgren.)

Arizona Rep. Trent Franks (R-CD8) is the man of the moment for pro-choice and pro-Democratic groups, after the Washington Post ran a story this morning with audio from this morning's House Judiciary Committee hearing in which Franks makes comments reminiscent of last year's well-publicized remarks by Rep-running-for-Senate Todd Akin (R-MO).

In speaking against attempted Democratic amendments to his bill to ban abortions after 20 weeks, Franks said that "...the incidence of rape resulting in pregnancy are very low.”  The committee hearing was not televised on C-Span, but video from the Judiciary Committee's webiste can be viewed by clicking on the picture below.  Rep. Franks' remarks are at approximately the 1:02.30 mark, and were in response to a question by Rep. Jerrold Nadler (D-NY) asking why Franks had noted that the rape/incest amendment was inappropriate because the bill is addressing abortions after 20 weeks of pregnancy and the proposed amendment did not require that the rape needed to be reported within 48 hours. 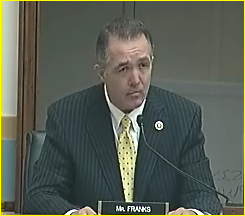 In addition, the Washington Post posted the below audio clip:

Last week, when Franks' subcommittee on the Constitution and Civil Justice approved the bill and the amendment making it apply to more than just the originally-intended District of Columbia, Rep. Steve Chabot (R-OH) was the one to make comments about the (lack of) frequency of pregnancies-as-a-result-of-rape seen by one of the witnesses (who had previously performed abortions):

"I asked him the question getting to this point of rape and health issues, et cetera, how many of those abortions that he performed were related to rape or  health issues. And he indicated of the 1,200 abortions that he had done, two were due to a rape....But I just wanted to make clear about how many exceptions and how many times we are talking about either rape or health issues. It is miniscule in comparison to the number of perfectly healthy babies whose lives are snuffed  out every day in this country due to abortion.  "

That may have been the origination of today's comment by Franks.

After Franks' subcommittee hearing on the bill three weeks ago, Arizona's Politics authored a Fact Check on attempts by both Franks' reelection committee and the pro-choice EMILYs List to fundraise off the bill.

We welcome your comments about this post. Or, if you have something unrelated on your mind, please e-mail to info-at-arizonaspolitics-dot-com or call 602-799-7025. Thanks.
Posted by Mitch M. at 2:19 PM