WATCH & READ, IN CONTEXT: Gov. Brewer On Senate's Immigration Bill, Yesterday and Today: I Have Not Endorsed That Bill

Arizona Governor Jan Brewer went back on Fox News Channel this morning to clarify the remarks she had made yesterday on FNC.  The Governor declared "Victory for Arizona" on Sunday, but Tweeted today that that was NOT an endorsement of the Senate's bill.

Brewer led off her Sunday interview by saying "I think that what we're seeing taking place in the Senate is a victory for Arizona.  I'm glad they finally decided to talk about the border surge."  Perhaps because most people see the Senate on the verge of approving the amendment on border security before passing the entire bill with approximately 70 votes, but many took that as Arizona's Governor jumping on the Senate bill bandwagon that was picking up steam among many Republicans.

The National Review ran a blog post declaring it an endorsement.  Arizona's Senators, who are both among the "Gang of 8" that put together the initial bill, praised their Governor.  McCain said: 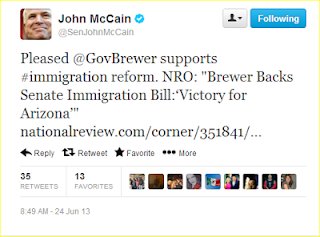 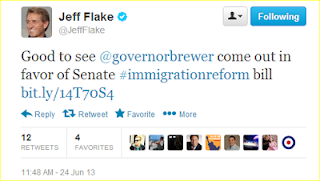 So, the Governor was back on Fox this morning, sticking with her "Victory for Arizona" line, but clarifying that she is still waiting to see what the House of Representatives does with the subject. 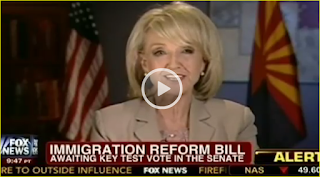 She followed with Tweets of her own, making it ever more clear that she is keeping all of her options open: 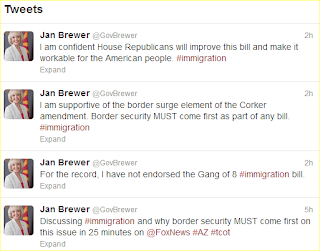 "Victory for Arizona" IS a good line that was guaranteed to get headlines.  It appears it was the Governor's imprecise wording ("taking place in the Senate") that got her in trouble with some factions in her party - many of the same people who are already steaming mad at her about the AHCCCS expansion.

We welcome your comments about this post. Or, if you have something unrelated on your mind, please e-mail to info-at-arizonaspolitics-dot-com or call 602-799-7025. Thanks.
Posted by Mitch M. at 2:26 PM