(I was unable to blog when this happened one month ago.  I am still catching up on some things that took place during that period.)

Former Arizona Rep. Gabrielle Giffords, who survived a 2011 attempted assassination in Tucson which turned into a shooting spree taking the lives of 13, received the 2013 John F. Kennedy Presidential Library Profile in Courage Award in May.

Her husband, former Space Shuttle Commander Mark Kelly, did most of the speaking on Giffords' behalf, but Giffords did take the microphone briefly to take a jab at Congress. 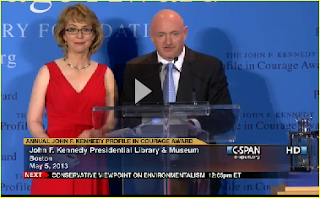 Kelly noted that his wife's "courage is the equivalent of a lunar mission" and that she is determined to make changes that will reduce gun violence in American society.

Giffords then took the microphone for a few seconds and added her thanks.  She could not resist taking a shot at Congress, shortly after the Senate had declined to push forward the Manchin-Toomey amendment aimed at expanding background checks for firearms purchases. 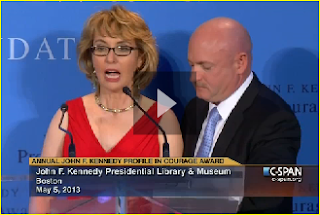 "Thank you to the Kennedy family for this award.  I appreciate it very much.  I believe we all have courage inside.  I wish there was more courage in Congress.  Sometimes, it (is) hard to express it.  I know.  It's been a hard two years for me.  But, I want to make the world a better place.  More than ever.  Thank you."

We welcome your comments about this post. Or, if you have something unrelated on your mind, please e-mail to info-at-arizonaspolitics-dot-com or call 602-799-7025. Thanks.
Posted by Mitch M. at 12:06 PM