BREAKING: Judge In Arpaio Recall Case Recuses Himself, Due To Previous Law Firm's Representation Of Sheriff In Racial Profiling Case

(Update: See end of arrticle for added paragraph about why case still active, even following failure of recall organizers to file signatures before deadline.)

In a move that may be more of "too little, too late" for the organization that unsuccessfully attempted to recall Maricopa County Sheriff Joe Arpaio, Superior Court Judge Michael Herrod disqualified himself yesterday from hearing the legal arguments about whether the recall effort violated the Arizona Constitution.

The disqualification came quietly one day after Defendants filed their short Motion of Change of Judge Or Recusal.  (Both the Motion and the Court's Minute Entry are reproduced below the jump.)  Judge Herrod had disclosed on May 29 - after having the case for more than two months and one day before the deadline for petition signatures to be turned in - his "potential conflict".  The disclosure also came more than one month after defendants had filed a motion for an expedited hearing on their motion to dismiss the case, a motion that is generally granted and that is not even necessary in many election-related cases. 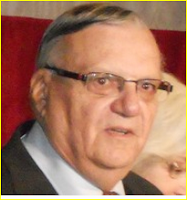 Following the status conference, defense attorneys were mum as to whether they would ask for recusal.  Plaintiff's attorney Larry Klayman was "confident" that Judge Herrod would remain on the case, noting that his client in the present case is NOT Arpaio but are supporters of his.

Respect Arizona attorney Christopher Ford was pleased by the Judge's prompt reaction to his Motion.  In his comment to Arizona's Politics, Ford noted "Arpaio, Klayman and Smith tried to play politics in the courtroom but failed, because the system worked as it is supposed to. A judge should remove him- or herself from a case where there could be even an appearance of bias, and Judge Herrod properly did just that in Wise v. Bennett."

Arizona's Politics had also reported on the extensive political activism and campaign contribution history of the judge and his wife, Cathi Herrod, who founded and is President of conservative organization Center for Arizona Policy.  Both Herrods had previously contributed to former Maricopa County Attorney Andrew Thomas - a close working and political ally of Arpaio.

The new Minute Entry notes that the case has been reassigned to Judge Lisa Flores.  She may not remain on this case as long as the first judge, however.  Judge Flores has had her own history with Sheriff Arpaio's office, and it is difficult to imagine the pro-Arpaio attorneys believing that she will be able to disregard her history with the Sheriff.

This lawsuit is still active, even after the recall organizers failed to turn in any signatures before the statutorily-imposed deadline of May 30 (120 days after they registered the petition) because plaintiffs argued to the judge at the May 29 status conference that their contention that the recall violated the Arizona Constitution - by not waiting for six months after Arpaio's re-election - still needed to be decided for future recall efforts.  They argued that, like the U.S. Supreme Court most famously held in Roe v. Wade, it was an issue that was capable of repetition yet evading judicial review.

Defendants' Motion to Recuse, and the Court's Minute Entry, are below.


Motion to Recuse 11jun2013 by arizonaspolitics

We welcome your comments about this post. Or, if you have something unrelated on your mind, please e-mail to info-at-arizonaspolitics-dot-com or call 602-799-7025. Thanks.
Posted by Mitch M. at 2:07 PM