The U.S. House of Representatives passed Arizona Rep. Trent Franks' (R-CD8) 20-week abortion ban this evening, 228-196.  Arizona's four Republicans voted for it, while the five Democrats voted against.  (Only six members of each party voted with the vast majority of the other party.) 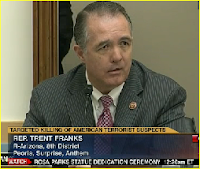 Last year, Franks' 20-week ban - which would have just affected the federal District of Columbia - received a majority, 246-168, but needed a 2/3 majority to move to the Senate.  This year's version, which first expanded from D.C. to affecting the entire country, and then was modified this week to include a exception in cases of reported rape or incest, will go to the Senate.  (Where it is highly unlikely to be brought to the floor.)


In addition to the last minute (post-committee) addition of the exception, Franks was taken off of the visible task of being the floor manager for the bill today, following his controversial remarks and criticism about the all-male makeup of the Republican side of the Judiciary Committee that considered the bill.  Female GOP Rep. Marsha Blackburn (R-TN) became the face of the bill this week.


We welcome your comments about this post. Or, if you have something unrelated on your mind, please e-mail to info-at-arizonaspolitics-dot-com or call 602-799-7025. Thanks.
Posted by Mitch M. at 4:19 PM