I'm not sure Jan Brewer will be boasting about the new slogan headlining this week's Politico Magazine.  Maricopa County Sheriff Joe may like his, but Politico asks if Brewer is "America's Most Puzzling Governor", in an article spotlighting her recent veto of SB1062, contrasting it with her awkward debate blank-out, and calling her "a strangely blank slate." 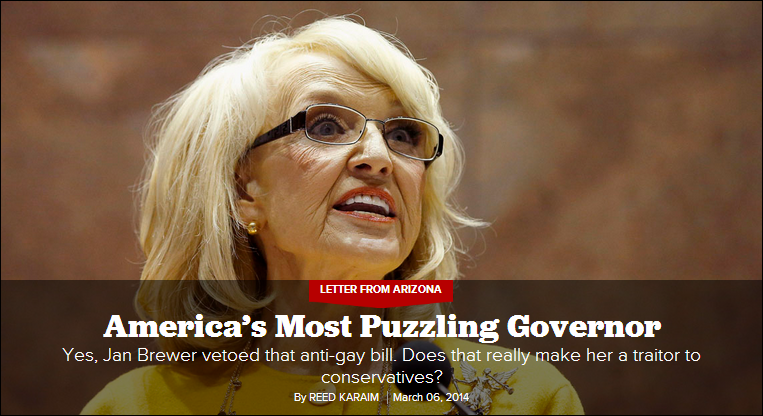 The cover story is written by Tucson freelancer Reed Karaim, and draws a surprising comparison between Brewer and President Barack Obama.  "Neither of them would like this comparison, but in a way, Brewer resembles Obama in her ability to leave both her natural constituents and her opponents confused and frustrated. Unlike Obama, however, somewhere in the last five years Brewer has become comfortable with the no-holds-barred political culture we live in today, a culture that exists in its purified, sometimes unhinged, essence in Arizona."

It is a fun, even-handed, well-written profile that explains details to the wider political public that those of us in Arizona are already familiar with.

Oh yeah.  I can't just use the "sun-bleached Sarah Palin of the Desert" without the rest of the paragraph:


Who is Jan Brewer? Is she the Tea Party heroine, the sun-bleached Sarah Palin of the Desert who signed SB 1070, the “show your papers” anti-illegal immigrant bill, and waved her finger in President Obama’s face on an airport tarmac? Is she the traitor to conservative causes who accepted Obamacare’s Medicaid expansion and battled her Republican legislature to get it implemented? Is she the seemingly overwhelmed, unelected governor of her first term who struggled to articulate basic positions? Or is she the woman who strode to the podium last week and not only slapped down a veto of a bill dear to the religious right, but did it with a brief, blunt statement the New Yorker’s Hendrick Hertzberg called “a damn good speech”? On that, no one can seem to agree.

We welcome your comments about this post. Or, if you have something unrelated on your mind, please e-mail to info-at-arizonaspolitics-dot-com or call 602-799-7025. Thanks.
Posted by Mitch M. at 10:45 AM