Within hours after Arizona Governor Jan Brewer announced that she would not try to run for re-election, Newsmax scored "an exclusive interview"* with Maricopa County Sheriff Joe Arpaio.  The sixth-term Sheriff says he now is - again - considering a gubernatorial run. 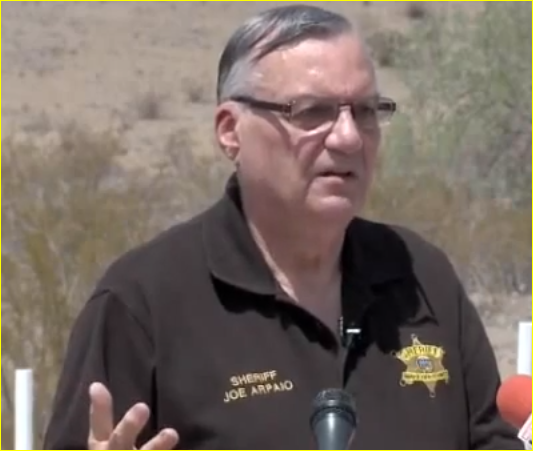 "If I'm ever going to do it, I should do it now," Arpaio told Newsmax.  "I don't want to wait until I'm 86 years old."  Knowing his audience, he said that all of the "sensitive things" he has going on in the MCSO would all "be in vain" if he runs for Governor.

* Newsmax thus failed one of the tests of a serious news site.  Universally held journalism standards prohibit the use of the terms "exclusive interview" and "Arpaio" in the same sentence.

We welcome your comments about this post. Or, if you have something unrelated on your mind, please e-mail to info-at-arizonaspolitics-dot-com or call 602-799-7025. Thanks.
Posted by Mitch M. at 7:38 AM