Arizona State Rep. Justin Pierce (R-LD25) - who is running to be Arizona Secretary of State - took advantage of his speaking slot at the annual Conservative Political Action Conference ("CPAC") to urge fellow conservatives to move past "hope" and to begin "inspiring this country to go forward".

Pierce had been scheduled to talk just before one of the most-anticipated speakers of the day, New Jersey Governor Chris Christie.  Instead, he took the podium from the big guy and delivered a personal 7-minute speech. (Louisiana Governor Bobby Jindal followed Pierce.)

Pierce talked of his memory of watching President Ronald Reagan address students ("the future doesn't belong to the faint-hearted; it belongs to the brave") - he was in 5th grade - following the Space Shuttle Challenger explosion on January 28, 1986.  He then tied it to his message to his similarly-aged son the day after President Obama defeated Mitt Romney to win re-election.

(To view the video, you may click here or on the picture below.) 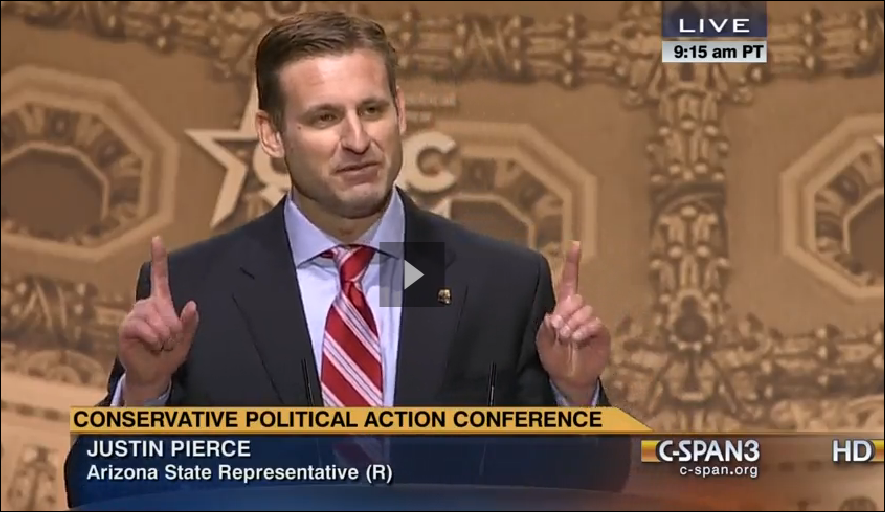 Afterward, Pierce posted on his Facebook page that it was "an amazing experience."

Pierce faces competition in the Republican primary for Secretary of State from Wil Cardon and state Sen. Michele Reagan. Terry Goddard is running unopposed for the Democratic nomination and no other candidates have filed.

We welcome your comments about this post. Or, if you have something unrelated on your mind, please e-mail to info-at-arizonaspolitics-dot-com or call 602-799-7025. Thanks.
Posted by Mitch M. at 8:36 AM