Even though Arizona Congressional candidate Jim Brown claims no athletic prowess to compare to the famous Hall of Fame football player who shares his name, his latest decision brought to mind a catchphrase of Phoenix' Broadcasters' Hall of Fame announcer Al McCoy.

Only, Jim Brown is switching to two - Congressional District 2.  Two months ago, the businessman announced his candidacy for the Republican nomination in CD1, in order to oust Rep. Ann Kirkpatrick.

However, after meeting and facing the other Republicans challengers in a forum, Brown decided to switch to a somewhat-less-power-packed primary.  fellow CD1 business-owner and conservative Gary Kiehne.  Brown chose Kiehne over Arizona state legislators Adam Kwasman and Speaker Andy Tobin. 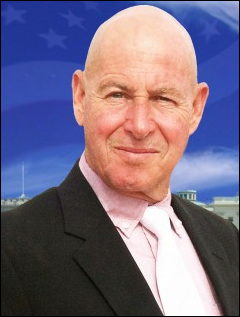 He decided to throw his support - and his supporters' support(?) - to

In a Kiehne news release, Brown said, “I’ve gotten to know Gary Kiehne over the last month and it’s clear to me that he exemplifies everything that I want to see out of a candidate for Congress. Gary is a strong conservative with a background in business and serving the community. In other words, he’s one of us, not a professional politician or political insider.
However, in thanking Brown on his Facebook page on Saturday, Kiehne - who, in fairness, has already had at least one staff typographical error problem - thanked "AZ businessman JOE Brown for his generous endorsement!" (emphasis added)  Now, there was a Joe Brown who was a famous boxer during the same era that Jim Brown was running up and down a football field.  But, if you are going to tout endorsements from previous opponents, you do need to proofread better. 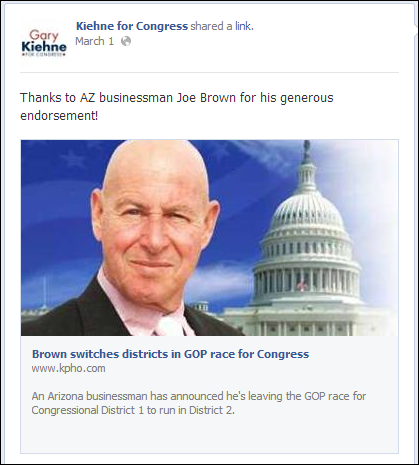 Brown now slides over to fight in CD2, where he will face Martha McSally and Shelley Kais in the GOP primary, to determine who will challenge incumbent Rep. Ron Barber in November.