The 2-year investigation into ethics violations by Arizona Rep. David Schweikert continues to take its toll on his campaign. More than two-thirds of the monies he raised in the last quarter of 2019 went to paying legal debt, and he incurred nearly $77,000 in new bills from four different law firms. 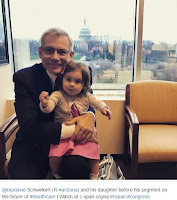 Schweikert's campaign has now racked up $985,932 in legal fees since the investigation began. The House Ethics Committee is continuing its investigative work behind closed doors into a multitude of alleged violations. Schweikert (R-CD6) has long stated that the ordeal surrounding minor allegations was on the verge of being wrapped up.

To make matters worse, a sixth law firm began billing the campaign this year. It is unclear from the campaign's FEC filing today how Ashby Law is now involved.* The legal bills this quarter were higher than the $57,011 received in the previous quarter, but are still less than any other full quarter since the investigation ramped up in the latter half of 2018. 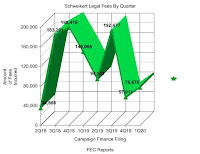 His committee's "net worth" on March 31, 2020 was $127,793. That compares unfavorably to the $1,145,000 net worth of Democratic challenger Hiral Tipirneni, and several of the other Democratic candidates may also be close to besting Schweikert's numbers.

The investigation of Rep. Schweikert initially seemed to be principally concerned with his former Chief of Staff, Oliver Schwab. However, it broadened even after Schwab left the office, and also includes "omitted required information from annual personal financial disclosures and from his periodic campaign finance reports."

Since the committee began incurring legal fees in the second quarter of 2018, 55 cents of every dollar contributed to the campaign has gone to pay the attorneys. In 1Q20, the number was actually 69 cents of each dollar**


*Holtzman Vogel is the law firm believed to be representing the campaign committee and/or the Congressman, while Holland & Knight has been counseling a group of six employees. Wiley Rein, Venable and Berke have all been paid by the campaign committee at one point or another.
**For the 2Q18 through the present number, we calculated the legal fees incurred divided by the total amount raised. $985,932/$1,799,911. For the 1Q20 number, we used the legal bills PAID by the total amount raised, or $152,288/$220,820. The difference is that the committee finally paid a large bill incurred in 3Q19, and we used the paid amount to show how the contributions received immediately went back out the door to the law firms.

We welcome your comments about this post. Or, if you have something unrelated on your mind, please e-mail to info-at-arizonaspolitics-dot-com or call 602-799-7025. Thanks.
Posted by Mitch M. at 2:57 PM