The parent company of Arizona's largest utility has given a $50,000 contribution to the pro-McCain SuperPAC, (the ironically-named) Arizona Grassroots Action. Pinnacle West Capital, the holding company for Arizona Public Service, is already being investigated by the FBI for its dark money political contributions in the 2014 Arizona Corporation Commission and Secretary of State campaigns.

AGA also reported today that it is spending $660,000 more this week in an effort to clinch next week's primary against State Sen. Kelli Ward. That brings the total independent expenditures to more than $2.6M. Reading between the lines, that means APS and/or other large contributors chipped in another $1.0M+ in the past two weeks. 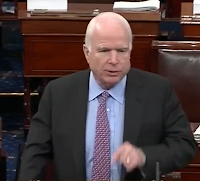 Their July 13 check to AGA is NOT dark money, because it was properly disclosed in a timely manner this past week by the SuperPAC.  PinnWest/APS is nowhere close to being the largest contributor to the attacking AGA - as Arizona's Politics has detailed previously, the bulk has come from "an interesting group of billionaires, Clinton supporters, Swift Boaters and Indian Communities"

\AGA had raised $2.2M through August 10, and has collected at least $1,000,000 more in the past two weeks.* Those monies will not be disclosed until October 15, well after next Tuesday's primary election.