GETTING CATTY(ier): Did Rep. Schweikert Get Booted From Committee Because He Leaked Story About Skinny-Dipping In Sea Of Galilee?; Sen. Rand Paul Jumps In

The saga of Arizona Rep. David Schweikert (R-CD5-->CD6) and three other Republicans getting removed from their coveted House Committee slots continues to unravel. Roll Call covered the Republican Study Conference meeting yesterday, and  Politico now is leading with unnamed Congresspeople and other sources saying that Schweikert and two of the others are "the most egregious assholes" in the Republican caucus. 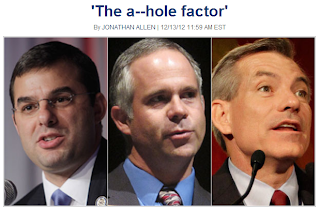 The incident that led to Schweikert being removed from the Financial Services Committee is reportedly the August reports (that started on Politico) that the FBI had investigated Representatives' (and staff's) behavior on a privately-funded trip to Israel in 2011; one Representative skinny-dipped in the Sea of Galilee and others apparently partially disrobed to frolic in the religiously-significant lake.

Schweikert was locked in a contentious primary fight with fellow Republican lawmaker Ben Quayle (R-CD3), they had both been on the trip, and Quayle was one of the Congresspeople who went into the lake (Schweikert was not).  Quayle was forced to respond shortly before the August 28 primary.


Meanwhile, many conservatives are escalating the intra-GOP battle with House GOP leadership.  Yesterday, Kentucky Senator Rand Paul - a Tea Party favorite and the heir apparent to the Ron Paul following - used his leadership PAC to send out an e-mail urging his and his father's followers to petition House leadership to reverse their committee assignment decisions.  (Arizona's Politics is on various Ron Paul e-mail lists but not on Rand Paul's; the list was definitely rented.)  The e-mail is reproduced below the jump. ("RAND-PAC" did not support either Schweikert or Quayle in the election.)

And at a closed door caucus meeting on Capitol Hill, Speaker Boehner reportedly warned members that leadership is watching their "voting patterns."

It appears the GOP establishment is going all-out to maintain their iron grip on the Republican Party.

You and I can't allow establishment Republicans to punish conservatives for voting their values.

That's why it's vital you sign the petition to House Speaker John Boehner and House Budget Committee chairman Paul Ryan.

The petition urges John Boehner and Paul Ryan to stop purging fiscal conservatives from committee assignments, and to reinstate the four already purged from their positions.

You see, according to news reports, two of the congressmen were purged from the Budget Committee for voting for a five-year balanced budget plan - instead of Paul Ryan's budget which balanced in twenty-eight years.

Apparently, it seems that not toeing the establishment line is grounds for purging fiscal conservatives from committee assignments.

Fellow Conservative, our country is $16 trillion in debt, the "official" unemployment rate is just under 8%, and assaults on our liberties continue on a daily basis.

It's time for Republicans to get serious for a change.

It's time for my colleagues to stop insulting American's intelligence with tired talking points and phony "solutions."

Instead of caving on their no tax pledge with phony solutions like the $800 BILLION tax hike put forth by leadership in the house, Republicans should be leading the charge for lower taxes and smaller government.

But I'm afraid, for that to happen, you and I are going to have to force my colleagues to recognize you will not tolerate Republicans being indistinguishable from Democrats.

And I believe one sure way to do that is for you and I to let the GOP establishment know constitutional conservatives won't tolerate them purging fiscal conservatives from their committee assignments.

Your generous contribution will help me mobilize millions of grassroots conservatives to turn up the heat on the GOP establishment to stop purging fiscal conservatives from committee assignments.

Even if it's just $20 or $10, any amount you can contribute will be put to immediate use in this critical fight.

You and I must not sit back and allow the GOP establishment to maintain its iron grip on our party.

And according to news reports, two of the congressmen were purged from the Budget Committee for voting for a budget that balanced in five years - instead of the establishment's budget which balanced in twenty-eight years.

That's why it's vital you help stop the conservative purge by signing the petition to House Speaker John Boehner and House Budget Committee chairman Paul Ryan.


We welcome your comments about this post. Or, if you have something unrelated on your mind, please e-mail to info-at-arizonaspolitics-dot-com or call 602-799-7025. Thanks.
Posted by Mitch M. at 11:13 AM