Arizona Secretary of State Ken Bennett (R) testified about the state's elections process before the Senate Judiciary Committee in Washington this morning.  He provided a defense of Arizona's process and of the voter identification requirements.  And, under questioning, he noted that two of the groups that mounted voter registration efforts in Arizona this year acknowledged that they had signed people - mostly, Hispanics - on to the Permanent Early Voting List ("PEVL") without their knowledge (by checking the box for the PEVL after the form had been filled out by the voter.  Bennett was trying to explain why some Hispanics may have had to vote provisional ballots on election day. (Although it would appear that that might contradict his claim that there was not a higher proportion of Hispanics who had to vote provisionally.)

"One of them admitted that of the 34,000 Latino voters that they registered within the last few weeks, or the month or two, before the election, on many of those voter registration forms, the voter themselves had not checked the box to be on what's called the Permanent Early Voter List and receive their ballot by mail.  For the purposes of the organization that was pushing the drive, I was frankly a bit surprised that they admitted to me that the organization officials had checked a box on the voter registration form that the voter may not have known had been checked by the group that they gave it, which caused a ballot to be mailed to those voters, and they were thinking that I'm going to go to the polls to vote and a ballot actually shows up that they thought was a sample ballot or whatever." (this quote is from the final six minutes of the hearing, and is transcribed by Arizona's Politics) 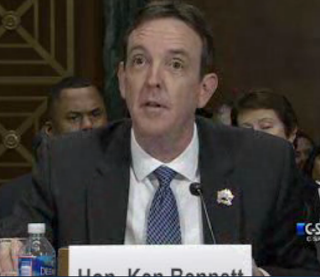 Arizona's Politics is seeking a response from the groups that Bennett references, and will update as necessary.

Here is a link to Bennett's written statement to the committee.