Retiring Arizona Senator Jon Kyl has been on his share of the Sunday news shows over the years - not as many as his Arizona colleague, John McCain, but who could top him?  Yesterday was Kyl's final appearance as a Senator, and he again sat next to New York Democrat Chuck Schumer and they went back and forth on the "fiscal cliff" negotiations.

Nothing much newsworthy came out of this discussion.  Here is the video and the transcript:

The entire transcript can be found here, but I have included a couple of the excerpts below the jump. 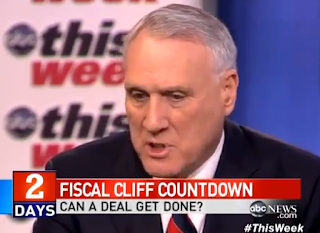 KARL: Give me your odds. I said 50/50...
(CROSSTALK)
SCHUMER: I think a little higher than that.
KARL: Senator Kyl?
KYL: I don't disagree with Chuck. And I also would say that the way you opened the program does not under- or overstate the consequences. If we are not able to reach an agreement, it will be dire. And that's from everybody from the Congressional Budget Office, which is nonpartisan, as you know, to the Fed chairman, probably at least another million jobs lost, an unemployment rate over 9 percent, and putting us back into recession. So responsible people on both sides of the aisle do need to try to come together, and there is a significant effort underway right now.
* * *
KARL: And let's remember. All the tax cuts are set to expire on January 1st, so I've got to ask you, Senator Kyl, a lot of Republicans, a lot of your colleagues, people you greatly respect have said, you know what, why don't we do $250,000? We've got to do what we can do.
Let's take a look. Senator Cornyn, who's going to replace you as the number-two Republican in the Senate, said, "I believe we're going to pass the $250,000 and below sooner or later. We really don't have much leverage there because those rates go up by operation of law December 31st. I would focus on areas we have more leverage."
So why would the president agree to raise that limit a dollar when you have so many Republicans that have said, you know what...
KYL: I don't think you have "so many Republicans." That was one statement, and the context of it was, what is realistic as a deal, given the president's adamant position that he wouldn't compromise on anything above $200,000?
Let's just get back to the theory, because Chuck had it right the first time. The more people you sweep up in this big tax increase, the worst it's going to be for the economy, the worse it's going to be for small business, and most importantly, the worse it's going to be for workers.
Let me just point out two interesting statistics. Over half of the dividends paid by corporations go to people 65 years of age and older. In fact, a majority of adult Americans own stock or -- let me just make this point -- so when the dividend rate goes up to 68.6 percent, which is the combined corporate and dividend rate, A, corporations aren't going to pay dividends, and, B, if you are one of those seniors that get a dividend in your retirement, you're going to be taxed 68 percent. And, secondly, the death tax, 55 percent rate...


We welcome your comments about this post. Or, if you have something unrelated on your mind, please e-mail to info-at-arizonaspolitics-dot-com or call 602-799-7025. Thanks.
Posted by Mitch M. at 3:35 PM