Retiring Arizona Senator Jon Kyl (R-AZ) gave his valedictory speech on the Senate floor this afternoon.   He finished by saying that "It's been an honor, really the privilege of a lifetime, to serve, and it IS difficult to say goodbye.  But I will depart Capitol Hill with enormous faith in the American people, a profound appreciation for the miracle of the American republic and a resilient optimism in America's future."

Kyl served three terms (18 years) representing Arizona in the U.S. Senate, and has been the Republicans' Minority Whip since 2008. 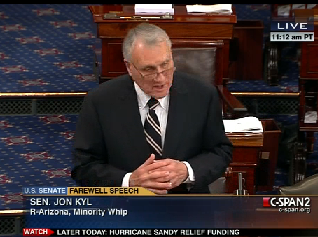 By the way, the Senator spoke for almost exactly 30 minutes.

We welcome your comments about this post. Or, if you have something unrelated on your mind, please e-mail to info-at-arizonaspolitics-dot-com or call 602-799-7025. Thanks.
Posted by Mitch M. at 3:28 PM